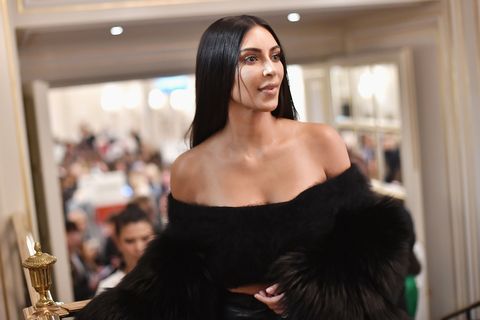 In a series of arrests made across Paris (and two of the city's suburbs) early Monday morning, The New York Times reports that French police have detained 17 people they believe to be responsible for robbing Kim Kardashian at gunpoint last October. (CNN and other outlets reported earlier in the morning that 16 people had been arrested, but that police action was continuing.)

Although none of those detained have been identified, The Daily Mail is running photos of some of the arrests, and describes "most" of the suspects as having "long criminal records." A police spokesperson told the Times that "the oldest of those arrested was 72 and that several of the others were in their 40s, 50s and 60s, which suggested that they were part of an 'experienced' group." In addition to the robbers themselves, the arrests made this morning are believed to include those involved in the disposal/resale of the stolen jewels afterwards — police reportedly believe the haul made its way to Belgium, where an investigation is also underway.

As previously reported, when the five robbers fled Kim's hotel following the robbery, one dropped a small piece of jewelry in the street — and by "small piece," I mean a $28,000 diamond necklace). It's believed police were able to pull a DNA sample from this, as well as from inside Kim's hotel room, where they are also believed to have left behind some of their "supplies," like the zip ties and tape used to bind and gag Kim. The DNA matched a "well-known armed robber" and, using this information, police set up a "surveillance operation" which led to his accomplices.

With police now working to lock in convictions, Kim will reportedly be asked to be involved in the identification process, and to view photos/videos of the suspects. It's not yet clear if she will need to return to Paris as part of any criminal proceedings to come, but her legal team have always said she'll do what needs to be done for ~justice~ to be served.