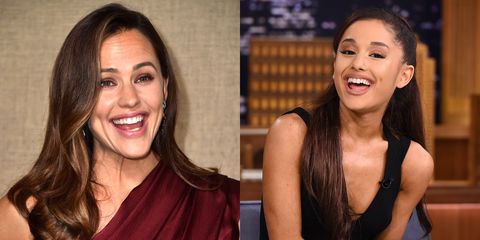 Did watching the video for Ariana Grande's latest song, "Thank U, Next" make you want to settle in on your couch for a teen movie marathon? If so, you're definitely not alone. The epic video featured send ups to classic teen comedies and rom-coms like Mean Girls, Bring It On and Legally Blonde.

But the homage that owned the video? That would be the one to 30 Going On 30. The 2004 rom-com, about a 13-year-old girl whose birthday wish to fast forward to 30 comes true (but she's 13 on the inside, a la Big), is probably the least well-known of the movies referenced in Grande's "Thank U, Next" video, but the reference (to the film's emotional ending) is pitch perfect with the song's lyrics.

Jennifer Garner, who starred in 13 Going On 13, alongside Mark "The Hulk" Ruffalo and Judy "Plays the Best Friend in Everything" Greer, saw the "Thank U, Next" video and loved it so much she had to gush on Instagram.

“Every now and then something comes along and just brightens your day. @arianagrande you’re adorable. Thank you, pretty girl. #thankunext," Garner wrote in the caption of a screenshot from the video, of Grande dressed as 13 Going On 30's Jenna Rink.

Every now and then something comes along and just brightens your day. 💫 @arianagrande you’re adorable. Thank you, pretty girl. #thankunext

Grande saw the post and proceeded to freak out and gush herself about how much 13 Going On 30 means to her.

“NooooooooOoOOoOo I’m crying. I watched this movie every night before bed growing up (and I still do sometimes, especially when I’m sad)," she wrote. "I adore you! Thank you for all the inspiration and joy you’ve brought to my life I’m screaming bye and by sometimes I literally mean every night still."

But the OG Jenna Rink didn't let the love fest end there. Garner commented on Grande's comment, volunteering her costars for a recreation of the movie's famous "Thriller" dance scene.

"OK NOW!!! WHAT?! Now I'M screaming! Why are we all screaming? But I am! I'm screaming!!!" Garner wrote in another comment. "@markruffalo and @missjudygreer and I will THRILLER with you any day of the week and twice on Sundays. We'll even ask @reesewitherspoon to bring her bend and snap."

Garner also posted a collage of images from the video on her Instagram Story, because one post was not enough to contain her excitement.

Garner wasn't the only 13 Going On 30 alum who loved the tribute in the "Thank U, Next" video. Ruffalo tweeted some love of his own for the vid.

Having some Razzles (it’s a candy AND a gum) in your honor, @ArianaGrande! #thankunext https://t.co/5QA1pNtbiO

"Having some Razzles (it’s a candy AND a gum) in your honor, @ArianaGrande! #thankunext," he wrote.

Looks like we won't be the only ones watching this video on repeat this weekend.

Watch it again for yourself below:

Related Stories
All The Easter Eggs in Ariana's 'thank u, next' 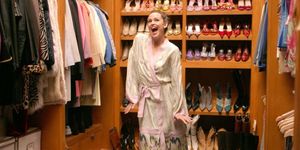 '13 Going on 30' Is Going to Become a Musical
Kayleigh Roberts Contributor Kayleigh Roberts is the weekend editor at Marie Claire, covering celebrity and entertainment news, from actual royals like Kate Middleton and Meghan Markle to Hollywood royalty, like Katie Holmes and Chrissy Teigen.
Advertisement - Continue Reading Below
More From Celebrity
Blake Lively Channels Vintage Femme Fatale
Dolly Parton, Icon, Started a Viral Meme
Advertisement - Continue Reading Below
Kylie Threw Stormi the Most Elaborate Party
Chrissy and John Had a Post-Grammys Dance Party
Selena Gomez Sent an Emotional Note to Demi Lovato
Nick Jonas Had Food In His Teeth at the Grammys
Why Isn't Beyonce at the 2020 Grammys?
Watch Demi Lovato's Emotional Grammys Performance
Beyoncé's Pre-Grammys Look
Blake and Gwen Were Too Cute at the Grammys