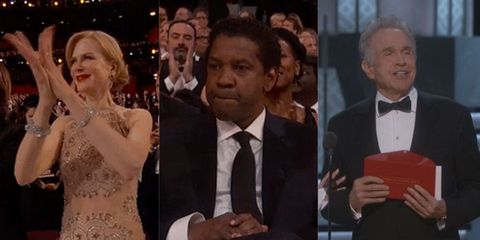 The Oscars 2017 took place last night and, as well as the biggest names in film donning their best outfits for the red carpet, they endured—and caused—some of the evening's most awkward moments too.

1. When Warren Beatty read the wrong envelope for Best Picture

Historic. After the cast and crew of La La Land had given acceptance speeches for the Best Picture Award, Beatty explained he'd been given the wrong envelope and that Moonlight had actually won the award.

During an interview with Matt Damon, Michael Strahan seemingly called the actor "Ben" by accident. Damon's face says it all.

3. When Scarlett Johannson slammed Ryan Seacrest on the red carpet

Speaking about how the actress was presenting an award during the ceremony, Seacrest referenced Johannson's stilettos and said, "Do you actually wear the shoes you are wearing tonight for the rehearsal?"

Johansson clapped back immediately at Seacrest and said, "What a ridiculous question."

4. When we all realized Nicole Kidman doesn't know how to clap

Seriously, she just doesn't know how to do it.

Denzel Washington's Fences nomination lost out to Casey Affleck for Manchester by the Sea in the Best Actor category, and he made no attempt to hide his disdain when Casey thanked him in his winner's speech.

He said, "It means so much to me, thank you. Whew, damn it. One of the first people who taught me how to act was Denzel Washington, and I just met him tonight for the first time. Thank you."

6. When Jimmy Kimmel's Hollywood Stars prank went on for too long

That one dude wanted nothing to do with the #Oscars pic.twitter.com/Dtz5uDxnqb

Jimmy Kimmel invited a Hollywood Stars coach tour of people to the Oscars as a surprise skit, and this guy was just like, "Okay, I'm ready to get back on the coach now."

Chrissy Teigen is all of us pic.twitter.com/9KdgtTSSpC

It was a little dull at points.

The actress had an teeny-weeny wardrobe malfunction on the red carpet, when her thigh-high split flashed a little too much at the paps. Oops.

9. When Justin Timberlake made everyone dad-dance during "Can't Stop The Feeling"

And no one (side note: by no one, we mostly mean Sting) really knew what they were doing.

We would've done the same.

11. When Auli'i Cravalho was hit in the face with a flag mid-performance

The Moana star belted out Best Original Song contender "How Far I'll Go" and continued to sing like a trooper after being whacked on the head by a passing flag.

And everyone assumed Jimmy Fallon did it as part of their on-going celebrity feud.

13. When there was a special Oscars edition of Mean Tweets

So wrong, yet so right (Emma Stone's one is brilliantly awkward).

The KUWTK star provided red-carpet fashion commentary for E! but was totally unaware of what the blue ribbon worn by several stars to support the American Civil Liberties Union meant.

Video of Kris Jenner obviously having no idea what the ACLU is. This is... unbelievable: #ERedCarpet pic.twitter.com/Eg76PgAhpn

15. When the Academy paid tribute to a woman in the "In Memoriam" section who is very much still alive

Emma Stone backstage: "I was also holding my Best Actress card at that time ... I don’t know what happened." #Oscars pic.twitter.com/FS11XVo11y

Advertisement - Continue Reading Below
More From The Oscars 2020
Twitter Is Livid Over J.Lo Not Getting Oscar Nom
Wells Adams and Sarah Hyland at the Oscars
Advertisement - Continue Reading Below
Bradley Cooper's Ex-Wife Comments on Gaga Drama
Bradley Cooper & Irina Shayk's Body Language
Did Bradley Cooper Skip the Oscars After-Party?
Ciara Debuts a Gorgeous Bob With Wispy Bangs
Kendall Jenner's Oscars Dress Was Nearly-Naked
Priyanka Chopra and Nick Jonas at the Oscars Party
Angela Bassett, We Are Not Worthy
The Most Awkward Moments from the 2019 Oscars