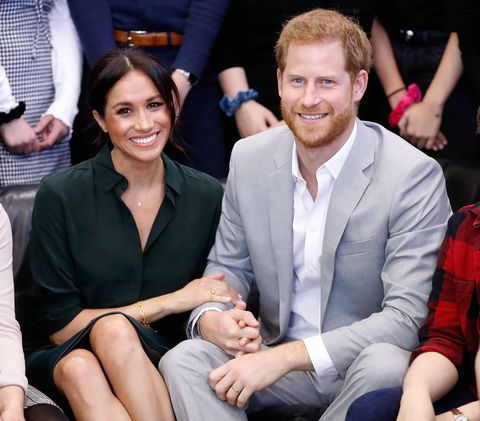 Royals love their traditions and Meghan Markle and Prince Harry love to go against those traditions. The Duke and Duchess of Sussex, known for pushing the royal etiquette envelope, might be gearing up to break another huge royal tradition when they welcome their first child this spring.

According to reports from the Daily Mail, Meghan probably won't give birth at the famed Lindo Wing at St. Mary’s Hospital, which you probably know best as "that giant, fancy red-bricked building that's always standing behind Kate Middleton when she steps out for her post-labor photo calls."

Kate isn't the only royal who has chosen to deliver at the Lindo Wing, of course. Prince William and Harry's late mother, Princess Diana, started the tradition of giving birth at St. Mary's and posing for a photo call with the newborn royal in question back in the 80s.

Meghan is not expected to follow the tradition, however, mostly because she and Harry will likely be settled in at their new home, Frogmore Cottage in Windsor (about 25 miles away from St. Mary's), by the time she gives birth.

So where will Meghan give birth? There are a couple of top contenders, according to People.

One option that Harry and Meghan are reportedly considering is Frimley Park hospital in Surrey. Frimley has a royal connection of its own—it's where Sophie, Countess of Wessex, gave birth to her two children.

Wave goodbye to your dreams of Harry and Meghan posing here.
Getty Images

The other option? A home birth. Home births aren't common today, but they're actually very traditional for the royal family, historically speaking.

Kensington Palace is not currently commenting on any of the options being suggested.

Related Stories
Shop Every One of Meghan Markle's Best Looks
Can Non-Royals Give Birth in the Lindo Wing?
Kayleigh Roberts Contributor Kayleigh Roberts is the weekend editor at Marie Claire, covering celebrity and entertainment news, from actual royals like Kate Middleton and Meghan Markle to Hollywood royalty, like Katie Holmes and Chrissy Teigen.
This content is created and maintained by a third party, and imported onto this page to help users provide their email addresses. You may be able to find more information about this and similar content at piano.io
Advertisement - Continue Reading Below
More From The Ultimate Guide to the Royal Family
Comparing the Two Biggest Royal Weddings
How the Queen Ends Awkwardly-Long Handshakes
Advertisement - Continue Reading Below
The Queen Has a Rule Against Bad Talking Family
The Queen Took a Pic of Philip With Her to Funeral
The Queen's Tolerance Was the Key to Her Marriage
Will & Kate Welcomed Harry Back Into Their Group
Queen Left a Handwritten Note on Philip's Coffin
The Queen Said Grief Is the Price We Pay for Love
All of the Photos from Prince Philip's Funeral
The Queen Wore This Brooch to Philip's Funeral