Amidst all the crazy Ariana Grande Grammy's drama, I'm here to ask the most important question. Ummm, did we know that Ariana Grande and Tyra Banks loved each other? Because in the tweet exchange no one saw coming, apparently the two are HUGE fans. Even better, now we know exactly how Tyra would make over Ariana if she were a contestant on America's Next Top Model.

Here's how it went down. Banks, who's just announced she's opening a Modelland theme park (not sure what that's going to look like, but I am IN, Tyra), was gushing over a picture of Ariana and that iconic ponytail. Great use of a pun, there, Tyra:

What a pony. What a “tail” @ArianaGrande is telling with this shot to get lost in. #GrandeFierceness pic.twitter.com/TGs6sCjUAZ

Ariana immediately lost her cool, in the best way, and professed her undying love for the model and ANTM host. "i always wondered what you’d do w my hair on the makeover episodes. i’m scared to know. but also. tell me. please," she begged.

hi i love u. i always wondered what you’d do w my hair on the makeover episodes. i’m scared to know. but also. tell me. please. i won’t do it. but please tell me. love u. https://t.co/5AmMIxLp0G

Tyra was, of course, more than happy to oblige. Apparently she LITERALLY uses Ariana's ponytail as an example of a powerful visual cue in her class at Stanford University. She also said, "You betta not touch that tail." So, now we know: No big hair makeover for Ariana, although I still maintain Ariana would look amazing if she kept that adorable lob she was sporting a few months ago.

2nd: I teach Personal Branding at @StanfordGSB and on day one, my lecture touches on the power of your pony. An iconic, visual cue to the world that identifies you!

3rd: You betta not touch that tail. https://t.co/HywocOWNEh

Also, apparently Tyra is secretly dying to be a short girl? Who knew! Ariana summed up the whole interaction for us perfectly.

Okay. Now that I'm thinking about it, I want a TV show for these two. Or for Ariana to guest star on ANTM and give expert tips on her style. Or Ariana to literally show up at Tyra's Stanford class and teach in her adorable pink glasses. The possibilities are ENDLESS. 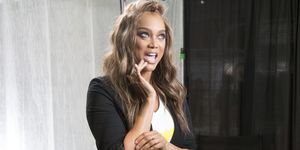 Tyra Banks Is Teaching a Class at Stanford 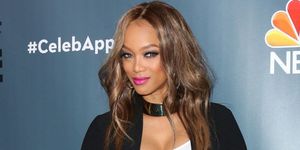