Katie Holmes is an actress, a mother, a very low-key girlfriend, and, it seems, very possibly a magical snow fairy. On Friday, Holmes took to Instagram to share a downright dreamy video of herself, spinning and generally being a whimsical, wonderful human, during a snow storm.

The video was captured on the set of Holmes' upcoming film, The Boy 2, which is currently filming in Victoria, British Columbia. Holmes is clearly enjoying her time on set, and that includes making the most of the notoriously chilly temperatures in British Columbia. The video shows the actress embracing the winter weather as she spins in slow motion with her eyes closed, basking in the magical dusting like Lorelai Gilmore enjoying the first snow of the year.

The Boy 2 is a sequel to 2016's The Boy, starring Lauren Cohan and Rupert Evans and sees the former Dawson's Creek star stepping into the role of Liza. News that she was joining the cast of the sequel broke in October of last year.

Per The Hollywood Reporter, The Boy 2 is a, "horror thriller centers on a young family moving into an estate, where their young son soon makes an unsettling new friend, an eerily lifelike doll he calls Brahms." 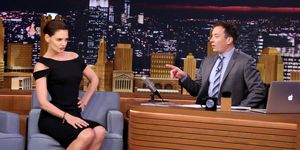