Parents don't play favorites, but that doesn't mean they don't have opinions about their kids' strengths and weaknesses. Apparently, Princess Diana thought some of Prince Harry's strengths might make him very suited to be king—possibly even more so than his older brother and actual heir to the British throne, Prince William.

The revelation comes courtesy of royal biographer Angela Levin who wrote in her biography Harry Conversations with the Prince that Diana thought her youngest son had the perfect natural disposition to be king.

"Harry’s seeming ability to cope, his ease with people and general gusto led Diana to believe that he would handle being king more easily than William. She even called him Good King Harry," Levin wrote, according to Express. "Diana felt less confident in William. 'William doesn’t want to be king and I worry about that. He doesn’t want his every move watched.'"

As for what kind of king Harry thinks he would be, the royal told Levin in an interview before his wedding to Meghan Markle:

"People would be amazed by the ordinary life William and I live. I do my own shopping. Sometimes when I come away from the meat counter in my local supermarket I worry someone will snap me with their phone. But I am determined to have a relatively normal life and if I am lucky enough to have children they can have one too. Even if I was king I would do my own shopping."

So there you have it: Good King Harry would do his own grocery shopping, tyvm. 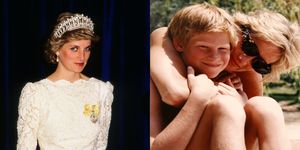 New Photos of Princess Diana Have Been Released
Prince George's Sweet Similarity to Princess Diana
Kayleigh Roberts Contributor Kayleigh Roberts is the weekend editor at Marie Claire, covering celebrity and entertainment news, from actual royals like Kate Middleton and Meghan Markle to Hollywood royalty, like Katie Holmes and Chrissy Teigen.
This content is created and maintained by a third party, and imported onto this page to help users provide their email addresses. You may be able to find more information about this and similar content at piano.io
Advertisement - Continue Reading Below
More From The Ultimate Guide to the Royal Family
The Queen's Corgis Are Helping Her With Her Grief
Charles is Looking Forward to Seeing Harry Again
Advertisement - Continue Reading Below
Will & Harry to Walk Together at Philip's Funeral
Prince Charles Addresses Prince Philip's Death
Prince William Pulls Out of 2021 BAFTA Appearances
Prince Philip Said He Had No Desire to Live to 100
The Queen Was by Prince Philip's Side When He Died
Prince Harry Is "Really Upset" Over Philip's Death
Will Harry & Meg Attend Prince Philip's Funeral?
The Queen Is Hopeful Prince Harry Will Return Home