This week, the big royal family news came when Prince Harry and Meghan Markle visited Bristol. The Duke and Duchess of Sussex braved the snow to greet fans before a tour of Bristol Old Vic, which just happens to be the world's oldest working theatre (something that a former professional actress can truly appreciate? Yeah, we think so).

Ahead of the tour, Harry and Meghan ignored the cold and the flurries of admittedly photogenic snow and put in some requisite schmoozing-with-the-people time while talking with a truly adorable gaggle of elementary school children who had turned out to meet them. Accompanying those cute kids were some dedicated, royal-loving parents—including one who shared a sweet moment with Harry during the meet and greet.

The woman got Harry's attention and showed him an old picture of his late mother, Princess Diana, from a trip she took to Thornbury in Bristol 25 years ago.

Harry was visibly moved by the photo and told the woman that he actually recognized the picture and the woman told Harry about the time her mom met his mom (apparently the woman's mother had been so nervous, she almost didn't let go of the flowers she had brought along as a gift for Diana).

The touching exchange was caught on video and a clip was The Royal Family Channel on Twitter.

Prince Harry was stopped by a woman in Bristol who showed him a picture of his mother Princess Diana from 25-years-ago. Visibly touched, the Duke tells her to look after the photograph.#PrinceHarry #DukeofSussex #Royals pic.twitter.com/FUhchXLQoO

"Prince Harry was stopped by a woman in Bristol who showed him a picture of his mother Princess Diana from 25-years-ago," the Royal Family Channel wrote along with the video. "Visibly touched, the Duke tells her to look after the photograph."

Related Stories
When Will 'The Crown' Introduce Princess Diana? 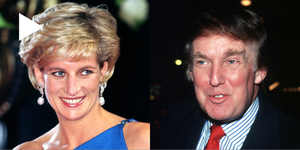 WATCH: Trump's "Creepy" History with Diana
Kayleigh Roberts Contributor Kayleigh Roberts is the weekend editor at Marie Claire, covering celebrity and entertainment news, from actual royals like Kate Middleton and Meghan Markle to Hollywood royalty, like Katie Holmes and Chrissy Teigen.
This content is created and maintained by a third party, and imported onto this page to help users provide their email addresses. You may be able to find more information about this and similar content at piano.io
Advertisement - Continue Reading Below
More From The Ultimate Guide to the Royal Family
This Old Video of the Queen Saying "Nah" Is LOL
Diana Had a Secret Message on Her Wedding Shoes
Advertisement - Continue Reading Below
Will's Friends Made "Jibes" About Kate's Mom
William Will Suffer "Worst" from Harry's Memoir
Harry's Friends Don't Want to Be in His Memoir
Will & Kate's Modern Approach to Raising George
Why Harry's Memoir Release Date Has Upset People
The Royals Are Worried About Prince Harry's Memoir
Harry Is Putting the Queen in a Difficult Position
Are Will & Kate Sending a Message to Harry & Meg?