All of the Kardashian kids are living some seriously blessed lives in 2019, and Stormi Webster is certainly no exception to the luxe rule. Kylie Jenner’s adorable daughter may only be 15 months old, but she has already enjoyed paradise birthday vacations, cosy ski trips to the mountains, and a casual $22k designer shoe collection.

And sure, mom Kylie might be the youngest billionaire in the business, but Stormi has just proved exactly who’s in charge of things. Her name is now officially tattooed on 21-year-old Kylie’s arm, in a sweet new tribute dedicated to her baby daughter.

Taking to Instagram to reveal the new ink to her 135million followers, Kylie showed off her latest tatt in the collection—a tiny ‘Stormi’ inked in uppercase on the back of her left arm. Her BFF Anastasia Karanikolaou, also known as Stassie/Stassiebaby, also got an identical, matching inking on her right arm to prove that she’s in the little girl’s life for the long haul.

Although this one is evidently very special as a tribute to her first child, Kylie’s been into tiny tattoos for a while now. She already has a miniature red heart inked on her tricep, while ‘Mary Jo’ is written for her grandmother on her bicep, ‘sanity’ is spelt phonetically on her hip, and ‘LA’ is daintily added onto her ankle.

The reality star, who launched her first line of skincare products this week, also has a squiggly red ‘m’ on her pinky finger, but hat one is perhaps a little awkward now. It was originally a friendship tattoo with Jordyn Woods and, well… we all know what happened there.

With Kourtney and Kim still being completely tattoo-free, and Khloe yet to unveil any ink tributes for her daughter True, I guess this makes Stormi the official, all-powerful Kardashian heir of the future. That’s how it works, right? 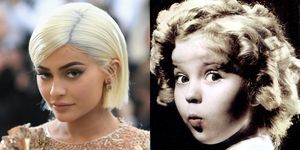 Celebrities Who Had Kids by the Time They Were 20
Lucy Wood Contributor Lucy Wood spends most of her time writing about celebby things, reading books, and waiting for the glorious day that she have enough millions for a pet sloth.
This content is created and maintained by a third party, and imported onto this page to help users provide their email addresses. You may be able to find more information about this and similar content at piano.io
Advertisement - Continue Reading Below
More From Celebrity
Camila Cabello's Hair Has *Never* Been This Short
Diana's Note About Her BBC Interview Is Missing
Advertisement - Continue Reading Below
Melania Didn't Want to Hold Trump's Hand Again
Twitter Is Living for Blue's Cameo in New Video
Will *Hated* How Archie's Birth Was Handled
Hear Adele's American Accent in This 'SNL' Promo
Meghan and Harry's Super Famous New Neighbors
Ryan Trolled Blake Over Those Drawn on Shoes
Charles Caused Chaos at the Queen's Coronation
Noah's Naked Bodysuit Look is Everything