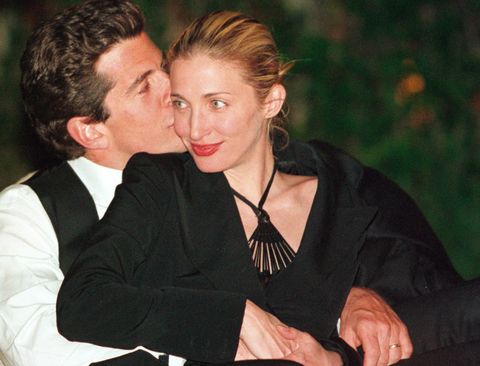 John F. Kennedy Jr. and Carlolyn Bessette Kennedy captured the attention of the entire world—whether they liked it or not—before their tragic deaths in 1999. In this week's People cover story, close friends and family members of the couple reflected on the couple's rocky last few weeks.

Despite their glamorous appearances in public, the couple had a tumultuous dynamic, and were extremely passionate in both good times and bad. "They would love hard, and they would fight hard," Ariel Paredes, an assistant to John's mother, Jacqueline Kennedy Onassis, told People. "But they were very much in love."

In the time before their plane crash, Carolyn felt the pressure from the glare of the paparazzi, while John was dealing with his magazine's financial problems. And at the same time, they were helping care for John's cousin, Anthony Radziwill, as he was dying of cancer.

Carolyn Bessette and John F. Kennedy Jr. attend a gala at the Whitney Museum of Art in New York City in March 1999, a few months before they died.

"To say their marriage was on the rocks is just inaccurate," Carole, Anthony's wife, told the magazine. "Anthony's impending death was a strain on their marriage, no doubt. But it was a difficult time for all of us. If it weren't, we would be inhuman."

Soon after, the two were flying to a family member's wedding when their plane crashed off the coast of Martha's Vineyard. After that, their entire relationship became colored by their weeks of conflict.

"Had he not crashed the plane, it would have been a meaningless few weeks of tension, but it took on a life of its own because it was the last chapter of their life," an anonymous friend of John's told People. "One week they could have been at war, and the next week they could be right back in love—we'll never know."