The Royal Family, quite understandably, don't tend to do a lot of a personal tweeting, perhaps because an accidental like while vigorously swiping could provoke an international incident. But Prince William deviated from that rule Wednesday, to show his support for England's soccer team in the FIFA Women's World Cup. (He is, after all, president of the Football Association.)

The Lionesses, as England's team are known, beat Norway in the quarter finals, becoming the first team to make it through to the semi-finals — and William, a renowned soccer fan, was pretty delighted by the news. "What a performance @Lionesses, a superb display!" he tweeted, in the most archetypal royal language imaginable. The whole country is behind you going into Tuesday’s semi-final, bring it on!"

What a performance @Lionesses, a superb display!

The whole country is behind you going into Tuesday’s semi-final, bring it on! W

David posted a photo of the moment on Instagram, writing, "So lucky to get to see the girls before tonight’s big game... As a player I know exactly what it means to play in these competitions and to have the support from home which means so much..I just want to say how very proud we all are of every single player, they are doing amazingly well and the whole country is behind them !!! As you can see Harper was so excited to meet the team & is so excited for the game...."

He also posted a cute photo on his story of star forward Nikita Parris and Harper; naturally, mini Beckham sported her very own England shirt. Harper, by the way, is an aspiring soccer player herself: on The Graham Norton Show last year, David said, "Harper is playing every Sunday and loves it." A future Lioness, perhaps? 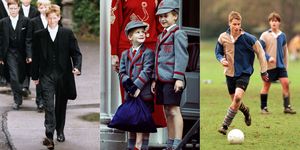 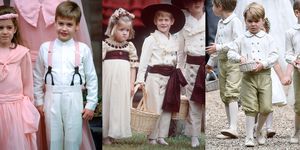 Prince George as a Page Boy: A Family History
Emily Dixon Emily Dixon is a British journalist who’s contributed to CNN, Teen Vogue, Time, Glamour, The Guardian, Wonderland, The Big Roundtable, Bust, and more, on everything from mental health to fashion to political activism to feminist zine collectives.
This content is created and maintained by a third party, and imported onto this page to help users provide their email addresses. You may be able to find more information about this and similar content at piano.io
Advertisement - Continue Reading Below
More From The Ultimate Guide to the Royal Family
Comparing the Two Biggest Royal Weddings
How the Queen Ends Awkwardly-Long Handshakes
Advertisement - Continue Reading Below
The Queen Has a Rule Against Bad Talking Family
The Queen Took a Pic of Philip With Her to Funeral
The Queen's Tolerance Was the Key to Her Marriage
Will & Kate Welcomed Harry Back Into Their Group
Queen Left a Handwritten Note on Philip's Coffin
The Queen Said Grief Is the Price We Pay for Love
All of the Photos from Prince Philip's Funeral
The Queen Wore This Brooch to Philip's Funeral