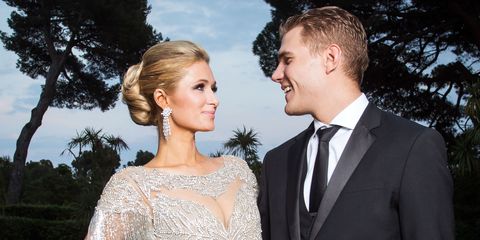 Paris Hilton and her boyfriend Chris Zylka celebrated their anniversary this week in her fave place, Ibiza. In honor of that special day, one of them paid a visit to the tattoo parlor. No, Paris didn't get "That's Hot" or "The 2000s 4Eva" on her back, but her boyf did get "Paris" written on his body.

As shown on Instagram, Chris had his lady's name engraved in Disney font on his left arm, right next to his tattoo of a lion (that sadly looks nothing like Simba or anyone from The Lion King). According to Paris, the tattoo was a complete surprise and is a tribute to their relationship, "cause I'm his most magical place on Earth & he finally found his fairytale princess," she wrote on Instagram.

Tattooing the name of your beloved is a risky deed, regardless of how famous you are. (Remember Johnny Depp and "Winona Forever?" Or Angelina Jolie's "Billy Bob" tattoo?) But it looks like Paris and Chris are ready to take that risk. I mean, she did use the #ParisForever hashtag on Instagram and there is some redness on Chris's arm, suggesting that the tattoo is still fresh. Or are Paris and Chris playing a cruel joke with a giant tattoo sticker because Paris actually thinks name tattoos are tacky, right up there with Von Dutch trucker hats and millennium pink?

While I wait for Paris to call me on my imaginary bedazzled phone, consider this second Instagram post about her anniversary, which was shared with a series of photos that scream #relationshipgoals (especially the sunset one). "You are my knight and shining armor & I have never felt so safe & secure," she wrote. "You have changed my life in so many ways & shown me what true love really is. You are my best friend, my other half & made me see that fairytales exist & dreams really do come true."