Here's your regularly scheduled David Harbour and Lily Allen relationship update: It looks like the celebrity couple, who were first spotted on a theater date in August 2019, are still very much into each other. Yes, you're probably already aware that the pair attended the Screen Actors Guild Awards together Sunday night (Stranger Things star Harbour was nominated in the "outstanding performance by a male actor in a drama series" category, according to People, but Peter Dinklage won the trophy for his role in Game of Thrones.) But if you didn't catch Harbour's Instagram story, you missed a considerable amount of gushing over Allen. Allow me to fill you in!

As People reports, Harbour gently teased the reveal of his date on Instagram, posting a series of photos of Allen from behind. The first, he captioned, "Who is my mystery date getting hair and makeup done in this hotel room I’ve been living in too long that is full of ‘I don’t know what the hell anymore’ stuff?" Next, he shared a photo of the couple, Allen facing away, with the caption, "Who's the stunning one in red?"

Finally, he shared a photo of the couple holding hands, writing, "That’s right, it’s the brilliant, beautiful, brash, bold, brave and just f***in' hot @lilyallen." Allen reportedly feels very much the same about her date: Back in November, Harbour told People, "Lily Allen once told me that I was so gorgeous it was an outrage." And this isn't the first time Harbour's lavished compliments on his girlfriend, either—he told People, "I really only look at my girlfriend’s eyes, until she’s turned away from me and I stare at her stunningly beautiful butt." 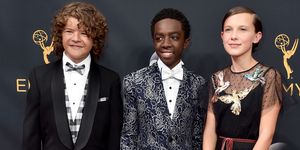 The "Stranger Things" Kids at the 2016 Emmys
Emily Dixon Emily Dixon is a British journalist who’s contributed to CNN, Teen Vogue, Time, Glamour, The Guardian, Wonderland, The Big Roundtable, Bust, and more, on everything from mental health to fashion to political activism to feminist zine collectives.
This content is created and maintained by a third party, and imported onto this page to help users provide their email addresses. You may be able to find more information about this and similar content at piano.io
Advertisement - Continue Reading Below
More From Celebrity
Royal Family Shares Rare Photo of Prince Philip
Chloe From 'Too Hot to Handle' Is in 'The Circle'
Advertisement - Continue Reading Below
There's Drama Over Prince Harry's Funeral Attire
Jennifer's Rep Breaks Silence on Adoption Story
Princess Eugenie's Prince Philip Tribute
Serena Williams Signed a Major TV Deal With Amazon
Chrissy Wrote Luna the Sweetest Birthday Message
Prince Harry Has Met Princess Eugenie's Son August
The Queen Returns to Work After Philip's Death
A Brief History Lesson on Brad and Jen