My life, like many people's, has lacked many things in the past few months. I've been missing the little things, like going out for happy hour and watching questionable reality shows with friends. Events across the country have been put on hold, from the Friends reunion to the current NBA and WNBA seasons. So when Netflix announced they would be dropping ESPN's Michael Jordan documentary The Last Dance about the Chicago Bulls' final championship season in 1997-98 on July 18, it called for a national celebration. The documentary covers a lot, but it seemingly ignores a couple of key figures in Jordan's life at the time—like his ex-wife, Juanita Vanoy.

Since Vanoy is left out of the documentary, a decision deliberately made by the series' director Jason Hehir ("I wasn't interested in the opinion of any wife or kids in this. We had the storytellers we wanted, and I felt like we had the story covered from every angle"), you might be curious about her. Here's what we know about Vanoy, and her relationship with Jordan.

Vanoy and Jordan's relationship started after they met through friends.

According to The Washington Post, Vanoy was a loan officer from the Southside of Chicago looking to earn an associate's degree when they first met. The pair were introduced at a Bennigans restaurant in Chicago after a Bulls game in 1985. In a 1992 TV interview, Vanoy explained the two met through a mutual friend who introduced them, thinking they would be a perfect match.

The Post also confirmed Jordan proposed to her during New Year's Eve in 1987 at a fancy downtown Chicago restaurant after two years of dating. She said yes (obviously!), but then...

There was a problem before Jordan and Vanoy tied the knot in 1989.

When Vanoy and Jordan got married in November of 1989, at the Little White Chapel in Las Vegas, they were already the parents of a son, Jeffrey Jordan, who was born the year prior. At first, Jordan did not believe Jeffery was his son.

"She told me she was pregnant, unwed, and that the father of the child was Michael Jordan," Vanoy's attorney Michael Minton said to The Washington Post about meeting with her in July 1988. "She felt she could not get Michael's attention or cooperation or response without the retention of a legal representative." Jordan later "admitted paternity within a few months," and when they tied the knot in Vegas, Jeffrey was at the wedding.

"I'm happy. It was a big move getting married," Jordan said, according to The Washington Post. "It helped me mature."

Vanoy and Jordan have three kids together.

Michael and Juanita then welcomed a second son, Marcus, in 1990, while their daughter, Jasmine, was born in 1992. Both of their sons ended up playing basketball but didn't pursue the NBA like their father. Jeffery is now in charge of the brand digital innovation for Jordan Brand, while his brother Marcus is the founder of a boutique store called Trophy Room.

According to InStyle, Jasmine spent time with the Charlotte Hornets as a basketball operations coordinator but now works at Nike as a Jordan Brand executive.

In a conversation with Crain's Chicago Business, Vanoy talked about how she wanted her kids to create their identities for themselves.

"When they were growing up, most coaches wanted them to wear No. 23," Vanoy said. "I insisted that they not do that. It was important to me. I wanted to make sure that their skills were going to be what they made them and that it was based on how hard they worked."

People reported Vanoy initially filed divorce paperwork in 2002, citing irreconcilable differences. The couple attempted to reconcile, and she withdrew her petition for a divorce a month later.

Unfortunately, four years later, in December 2006, Jordan and Vanoy announced their split in a joint statement.

"Michael and Juanita Jordan mutually and amicably decided to end their 17-year marriage," the couple's lawyers said in a statement, according to People. "A judgment for dissolution of their marriage was entered today. There will be no further statements."

Vanoy received $168 million in the divorce settlement, one of the largest at the time, according to Chicago Business.

Friends were still shocked by the split at the time. "But they clearly communicate," said family friend Les Coney to PEOPLE. "When Juanita couldn't get the stereo to work, he's the first person she called. And Michael was right there."

She wasn't in the documentary on purpose.

Shocker, I know! You would think a documentary about one of the most private, professional athletes would want to go a little deep into his personal life. Still, executive producer Mike Tollin says that was never the plan.

"We had a checklist: gambling, conspiracy theory about retirement, his father's death, his lack of activism, and his teammates," said Tollin in an ESPN interview. "I think we touched on all categories. From the start, we asked ourselves, 'Is this a workplace drama, or is it a domestic one?' We both believed it was a workplace story, and [director] Jason [Hehir] and I shared a general disinterest of the wives and children of the lead characters."

WATCH 'THE LAST DANCE' ON NETFLIX 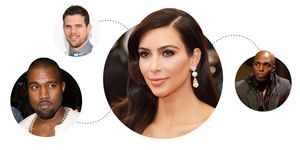 24 Celebs Who Have Been Divorced More Than Once


Bianca Rodriguez Bianca Rodriguez is the digital fellow at Marie Claire, where she covers all your favorite podcasts, Netflix shows, and celebrities ranging from Rihanna to Harry Styles.
This content is created and maintained by a third party, and imported onto this page to help users provide their email addresses. You may be able to find more information about this and similar content at piano.io
Advertisement - Continue Reading Below
More From Celebrity
Prince Philip Will Not Have a State Funeral
Harry Doesn't Want Drama at Philip's Funeral
Advertisement - Continue Reading Below
How Meghan Feels About Missing Philip's Funeral
Eva Longoria Loves Her Mini Trampoline
The Royals Won't Wear Uniform at Philip's Funeral
Jennifer Lopez and Alex Rodriguez Announce Breakup
Charles Teared Up As He Read Tributes to Philip
The Gucci Family Is Upset About 'House of Gucci'
Taylor Sent the Sweetest Gift to a Frontline Nurse
Royal Family Shares Rare Photo of Prince Philip