Here's the thing about celebrity relationships: No matter how short-lived they may be, or how thoroughly all parties have moved on, in the eyes of the public they are eternal. Which explains the current state of Jake Gyllenhaal's Instagram comments, courtesy of Taylor Swift's fanbase. Gyllenhaal and Swift reportedly dated from around October 2010 to January 2011, you may recall.

Allow me to explain: Earlier this week, Gyllenhaal shared a childhood photo of himself wearing glasses in support of New Eyes for the Needy, a non-profit which provides glasses to those in financial need. Observe:

Here's the thing: There's a track on Swift's 2012 album Red (which is her all-time best album, and I will not be persuaded otherwise, internet) titled "All Too Well," which is widely believed to be about Gyllenhaal. In the track, Swift reflects on looking at her then-boyfriend's childhood photos, singing, "Photo album on the counter/Your cheeks were turning red/You used to be a little kid with glasses in a twin-sized bed."

So when Gyllenhaal posted a photo of himself as, quite literally, a little kid with glasses, Swift fans could not help but quote those lyrics in the comments. At time of writing, there's almost 8,000 comments on the Instagram photo, and I'd wager at least 75% of those are from Swifties.

The closest Gyllenhaal's come to discussing his relationship with Swift was in 2017—and even then, he pretty much dodged the question. Jeff Bauman, a Boston Marathon survivor who Gyllenhaal played in the movie Stronger, brought up Swift during an interview, asking, "If you lost your legs in real life, do you think Taylor Swift would write a song about it?" Gyllenhaal's response: "For me, or about it?"

Bauman clarified, "For you—like a country song," and Gyllenhaal seized the opportunity to joke his way out of the tight spot. "She sort of moved into pop now," he said. And alas, the Swift questions ended there. 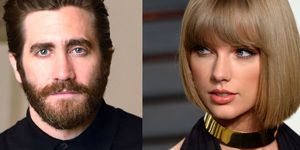 Jake Gyllenhaal Just Chatted About Taylor Swift
Taylor Did Her Own Hair and Makeup for the ACMs
Emily Dixon Emily Dixon is a British journalist who’s contributed to CNN, Teen Vogue, Time, Glamour, The Guardian, Wonderland, The Big Roundtable, Bust, and more, on everything from mental health to fashion to political activism to feminist zine collectives.
This content is created and maintained by a third party, and imported onto this page to help users provide their email addresses. You may be able to find more information about this and similar content at piano.io
Advertisement - Continue Reading Below
More From Celebrity
See Kate Middleton's Subtle Environmental Look
Prince George "Adored" Seeing Dinosaur Fossils
Advertisement - Continue Reading Below
Kate Middleton Borrows The Queen's Fashion Trick
Princes Charle and William "Competing" Over Causes
Lilibet May Be Christened in California After All
The Sweet Family Photos in Prince William's Office
Royal Family Members Can’t Eat Pasta or Potatoes
Prince George Is an Environmentalist, Too
Salma Hayek Looked Super Hot in Leopard Print
Britney Spears Just Trolled Justin Timberlake