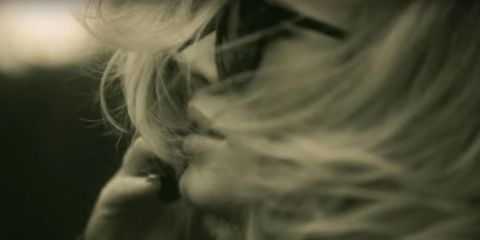 Since its release on Friday, the Internet has been going crazy over Adele's new music video for her single, "Hello." And the thought we were all left with after our tears dried was singular: What's the deal with the flip phone?

Here we have this beautiful, heart-wrenching breakup song—this soulful ballad that every modern woman will be playing on loop for the foreseeable future—and there's Adele using an old-school flip phone. Like, circa 2003 cellular brick status. It's 2015. WHY?

While we admittedly felt a touch nostalgic for that satisfying snap you can only get with a flip phone, the drawbacks are too numerous to overlook. How are you supposed to carry on a functional relationship when you can't even text? (Or, if you can, it requires you endure the slow and arduous task of pressing the 4 button twice, the 3 button twice, and then 9 three times, just to type out the word 'Hey'. And let's not even attempt 'Hello'.) To make matters worse for her clearly struggling romance, Adele can't even get decent reception on her dinosaur device to carry on an audible phone call.

"I just got here and I think I'm losing signal already," she says into the phone in the opening sequence. "Hello? Can you hear me now?"

No, Adele, they probably can't.

But, it turns out, there is a reason for the use of such throwback technology—and it's not to exacerbate her communication issues. Responding to the Internet's collective flip phone flip-out, "Hello" director Xavier Dolan revealed his reason for eschewing the iPhone in a very exasperated tweet.

Dolan expanded on his tweet in an interview with People:

"It's just not that big of a deal. It makes me uncomfortable filming iPhones because I feel like I'm shooting a commercial… Those things: iPhones, laptops, all those elements, to me, they bring me back to reality: That's not what you want. You want to get out of your own life; you want to enter someone else's; you want to travel somewhere; you want to be told a story. I'm realizing maybe I've been more distracting than anything else with that flip phone, but it wasn't intentional!"

So there you have it. Now he'd like us all to get over it, because we're stressing him out. (Though there's no way it even comes close to the level of anxiety he caused Adele/us... but we'll go ahead and call it even.)