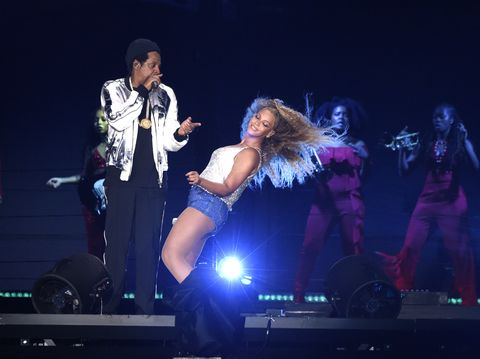 Beyoncé has had a very eventful week on her On the Run II tour. First, during her Thursday night concert in Nashville, Bey nearly took a stumble on stage—but recovered so flawlessly that she might have just made "almost falling down stairs" a new dance move.

Related Story
The Beyonce Interview You Have To See

The moment must be seen to be believed:

On a more serious note, Beyoncé and Jay-Z had a near run-in with a crazed fan during their Saturday night show in Atlanta. At the end of their performance, Bey and Jay turned to walk backstage, at which point fan videos from the concert show a man jumping on stage and attempting to follow the Carters.

Another view of tonight’s incident

Beyoncé's backup dancers, however, were having none of it, and immediately sprung into action, chasing the man down. As Complex reports, the man was tackled by the dancers.

#OTRII the fight at the end!!! I need help dissecting this!!! pic.twitter.com/7MEiiQViKg