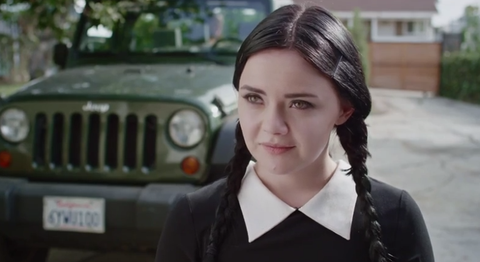 "You'd be a lot prettier if you smiled," one guy yells at Addams, while the other goes much lewder (warning: NSFW) as they drive off in their Zoolander-esque Jeep.

Addams shows up at their doorstep, and well...things get a little dark. But don't worry—no one dies. At least, not today.

"Some have argued that Wednesday Addams would have just decimated the catcallers – but in the Addams's philosophy, death is a gift," Hunter explained to People. "And death by Wednesday's henchmen would have been too honorable of a death for these two."

Is it weird to want to be besties with a fictional character?

A kick-Ass New Project Is Shedding Light on Street Harassment

Hidden Camera Shows How Much Women Get Harassed Every Day

Samantha Leal Senior Web Editor I'm Sam, the senior editor at MarieClaire.com.
Advertisement - Continue Reading Below
More From Celebrity
36 Celebrity Couples Who Love Some PDA
Ben Affleck Is Blond Now
Advertisement - Continue Reading Below
A Timeline of Charles and Diana's Relationship
Kendall Jenner Wants to Work for Beyoncé
Harry & Jon Bon Jovi Sing Together at Royal Event
Khloé Kardashian Is Being Trolled Over Febreze
A 'Friends' Reunion Special Is Coming to HBO Max
Katie Holmes Is in Head-to-Toe Chloé at Their Show
Ariel Winter Now Has Strawberry Blonde Hair
46 Stars Who Dated Before They Were Famous