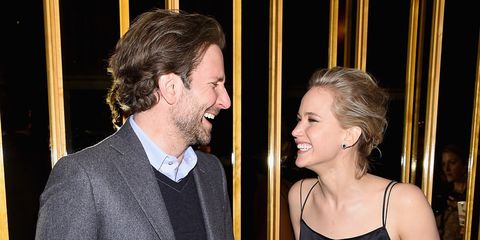 Newly-single Bradley Cooper has been taken off of one market: the work marriage one, by none other than Jennifer Lawrence. The actress, who's been in four films with Cooper (including David O. Russell's Joy, which they're filming now), announced their professional union at the New York premiere of Serena this weekend, according to Page Six. The two said that because of their film history together, they are now "work husband and wife," but with "no sex," Lawrence noted. They keep that stuff on-screen.

Cooper, doting husband that he is, had nothing but praise for J.Law. "I respect her so much as a professional, as an actor, I think she's the best there is," he told the outlet. If that doesn't win him work husband of the year, what will? (Your move, Josh Hutcherson.)

How Kim Kardashian Turned Her Friend Into a Husband

I Let My Husband Dress Me for a Week