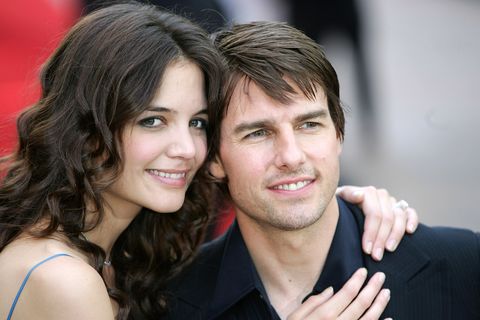 Why? Perhaps because when Katie (or is it still Kate?) filed for sole custody of Suri she made enough of a statement that she wanted to protect her daughter from the church that Gibney didn't feel the need to include her in the film, or perhaps he thought sharing the rumor that Cruise tapped Kidman's phone was enough of an indictment against the actor.

Among other things Scientologists clearly didn't want getting leaked was the fact that Katie, who was worried that Tom was monitoring her calls too, was able to escape Scientology by securing a disposable cell phone. She used it to call attorneys from three law firms in three different states. This move helped her prep her case without Cruise knowing that she wanted a divorce.

When Cruise and Holmes ultimately split in June 2012, tabloids reported that it was because Katie was afraid that Tom wanted to ship Suri off to Sea Org—a strict faction within the Church of Scientology. While those rumors swirled, Katie allegedly rented a secret apartment in NY to keep Suri safe, or at least out of the gossip rags.

As a side note, when the newly-dating Tom and Katie made one of their first-ever public appearances at the David di Donatello Awards in April 2005, I was "with" them in Rome at the time. I excitedly waited by the red carpet, alongside 12 confused Italians who had no idea who Katie was. Tom was all charm, jumping on a car in front of him (a la that manic Oprah couch moment), signing autographs and grinning in pictures. Katie, on the other hand, stood eerily still despite my many calls of affection to her (I may or may not have been unhealthily obsessed with Dawson's Creek). Instead of engaging with anyone, or even looking at the (albeit miniature) crowd, she exclusively spoke to one woman, who I later learned was her Scientology shepherd of sorts. Tabloids later reported that she was instructed not to speak with anyone. Figures.

Brie Schwartz Deputy Editor, OprahDaily.com As deputy editor, Brie oversees OprahDaily.com's lifestyle content including beauty, style, health, and relationships.
This content is created and maintained by a third party, and imported onto this page to help users provide their email addresses. You may be able to find more information about this and similar content at piano.io
Advertisement - Continue Reading Below
More From Celebrity
Princess Beatrice Has Given Birth to a Baby Girl
Gigi Hadid's Mom Shared Sweet Pics of Khai
Advertisement - Continue Reading Below
Kate & Will Probably Won't Have a Fourth Child
Ben & Jen Plan to Spend the Holidays Together
Kate & Will Are "Anxious" About Harry & Meghan
Mandy Moore Calls Breast Pump Emmy's MVP Accessory
Royal Nanny to Get Damages from Interview Scandal
Prince William and Kate Will Focus on Work in 2022
Kate Middleton Shares Prince Louis's First Words
Prince Charles Shares Final Exchange With Philip