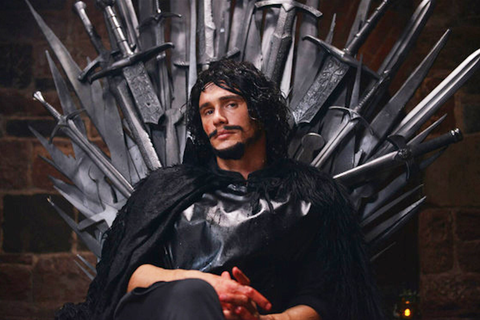 After sustaining a bunch of stab wounds dealt by his fellow Night's Watchmen—that's *one* way to gauge whether your coworkers hate you—Jon Snow didn't just lie there, life flashing before his eyes. Nope—he was plotting his next career move as Jon Snow, planner of "the most spectacular weddings in the realm."

In a sneak peek of the web series Making a Scene with James Franco, the perennial student has been charged with making Westeros's first gay wedding a fighting-, raping-, and penis-mutilation-free night to remember. Too bad he didn't check the guest list twice, though, because with Dany and her dragons, the Dothraki, a White Walker, and a slew of Lannisters in attendance, it's going to be mighty tough to keep the peace.

Watch the preview below, and stay tuned for the full episode.