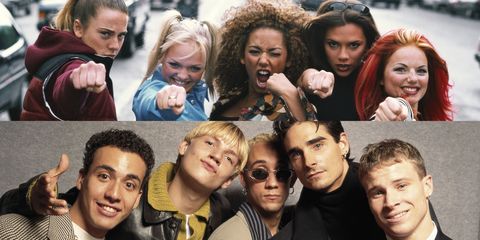 If you were a tween/teen in the late '90s/early aughts, there is no doubt that you were either 1) Team Spice Girls, 2) Team Backstreet Boys, or 3) more often than not, Team Both. So this should make your day just a bit brighter: Rumor has it that the two groups will be joining together for a U.S. tour.

We know, we know...internet rumors. But. BUT. Guys: This one was started by an actual member of the band.

Backstreeter AJ McLean told Rolling Stone: "The Spice Girls tour has been this idea bouncing around for the past year and a half, and it's something we're still talking about."

The Daily Star in the UK confirmed that the Spice Girls (minus Victoria Beckham, who is focusing on her fashion career) have all admitted that they're planning on another reunion tour. So it makes sense that two of the biggest groups would get together to sell out some venues, right? RIGHT, EVERYONE?

Samantha Leal Senior Web Editor I'm Sam, the senior editor at MarieClaire.com.
This content is created and maintained by a third party, and imported onto this page to help users provide their email addresses. You may be able to find more information about this and similar content at piano.io
Advertisement - Continue Reading Below
More From Celebrity
Ben Affleck and Jennifer Lopez Made Out in NYC
Lady Gaga Stunned in an Old Hollywood Look
Advertisement - Continue Reading Below
Olivia Rodrigo Looked Jaw-Droppingly Beautiful
Will's "Alleged Bullying" Drove the Sussexes Out
Sam Asghari Opens Up About Britney Documentaries
Prince Harry’s Memoir Is Concerning Royal Insiders
Meghan Markle Wore Some Familiar Earrings in NYC
Harry and Meghan Could Visit England for Christmas
Meghan Markle Looked Gorgeous at Global Citizen
Harry and Meghan Are Taping Their NYC Trip