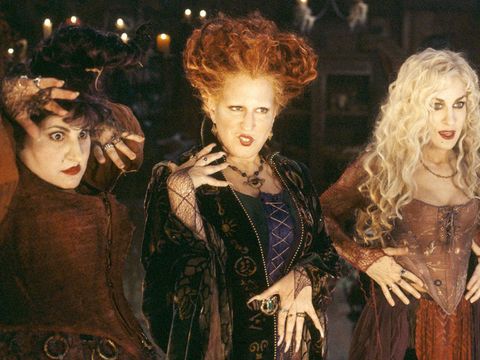 For anyone (AKA everyone) waiting for a sequel to Hocus Pocus, possibly the greatest Halloween movie ever made, we may still have a lot more waiting to do. Bette Midler took to Twitter on Monday to address our thirst for an HP2. The results? Hilarious.

Tagging co-stars Sarah Jessica Parker and Kathy Najimy, the actress makes reference to the plot, which tells the story of three witches set free after a virgin lights a magical candle. (BTW, the "virgin" could have been so different.)

In 2014, rumors circulated, to our delight, that a revamp was on the way, with Tina Fey as a producer. Fey crushed our dreams and denied them. Then in November, Midler fanned the flames once again when she participated in a Reddit AMA.

"Inundate the Disney company," she said. "Because I have canvassed the girls and they are willing to do it, but we have no say in it, so if you want a Hocus Pocus 2, ask the Walt Disney company."

Excuse us while we start a petition.