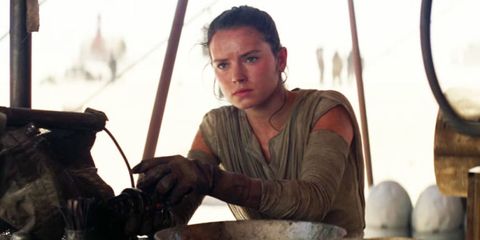 Daisy Ridley is on the precipice of superstardom (heh) thanks to her headlining role in Star Wars: Episode VII—The Force Awakens, and the series' original leading lady, Carrie Fisher, has a few pointers. Especially when it comes to the objectification that's synonymous with being an attractive female in a blockbuster film.

While talking with Interview Magazine, Fisher reminded Ridley that badass intergalactic women are overly sexualized, but that it's within her power to do something about it. "You're going to have people have fantasies about you! That will make you uncomfortable, I'm guessing," she says. "Have you been asked that?"

"No, they always talk about how you're a sex symbol, and how do I feel about that," Ridley responds. "I'm not a sex symbol!"

Fisher—who doesn't see herself as a sex symbol either—encourages Daisy to take a stand against the metaphorical "slave outfit" and hold her ground.

"You should fight for your outfit. Don't be a slave like I was," she says. "You keep fighting against that slave outfit."