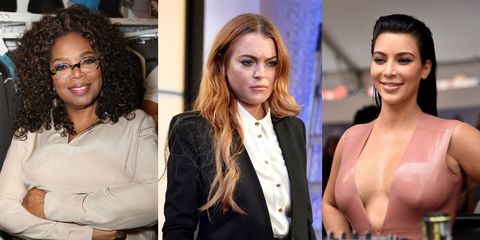 We need to talk about Oprah.

Last week, Rebel Wilson went on radio show Kyle and Jackie O. to voice her extreme dislike of the Kardashians, namely because "Kim Kardashian got famous from the sex tape, and I went to acting school and worked really hard." This week, Oprah, of all people, appeared on Kyle and Jackie O., where she stuck up for the family and kinda-sorta-but-actually suggested Lindsay Lohan doesn't have what it takes to carry her own reality show.

"To really create a reality series that looks like something is actually happening, you have to be on all the time," Winfrey said of an interview for which she stayed seven hours at the Kardash Kompound, after which the K-squad shot their program for another seven hours. "I went to film them as a family. I couldn't believe how hard they work. So I disagree that they don't do work. They have become their own iconic phemon, in this country and abroad, and you don't get that by not doing some work."

Unlike some people COUGH COUGH.

"[Lindsay Lohan is] one of those people who said, 'oh yes, sure, I'll have the cameras follow me' and then when you realize how much work that really is…you know how much acting you got to do to make it look real?"

Apparently, Lohan still texts her savior from time to time with updates on her love life. I'm sure they'll have something else to talk about now.

Chelsea Peng I'm Chelsea Peng, the assistant editor at MarieClaire.com.
This content is created and maintained by a third party, and imported onto this page to help users provide their email addresses. You may be able to find more information about this and similar content at piano.io
Advertisement - Continue Reading Below
More From Celebrity
Gwen Stefani Is Unrecognizable In New Insta Post
Lady Gaga Wore Serious Platform Heels in Rome
Advertisement - Continue Reading Below
North West's Pet Lizard Has Its Own SKIMS
Is Harry & Meghan's Archewell Update a Royal Diss?
Why Is the Royal Family Called "The Firm?"
Meghan Says Palace Is “Perpetuating Falsehoods"
Twitter Blasts Media's Targeting of Duchess Meghan
Palace Is Looking Into Meghan Bullying Allegations
Meghan & Eugenie Are Still Close After Royal Exit
Harry's Oprah Interview Suit Is a Nod to Archie