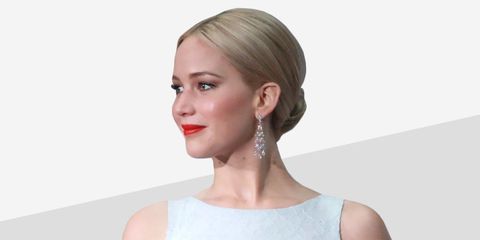 I don't know which to be more jealous of: that Diane Sawyer got to spend a dream day eating barbecue with Jennifer Lawrence or that she got more than 10 minutes of primetime to tell the story of how she and Jennifer Lawrence ate barbecue.

In an interview for ABC, Sawyer and Jennifer "Lonely Every Saturday Night" Lawrence bond over their Kentucky upbringings (and smoked meats), play with bows and arrows in an art gallery, and talk about relevant topics such as the pay gap and her post-Hunger Games and Nicholas Hoult identity.

On her "habit of submissiveness" that prevented her doing the unlikable thing and demanding her share, which she has no problem doing now: "I felt like I had to say something because we need to talk about it. On average, women are paid 21 percent less than men. We can ask for the same exact thing that men do, and we do face the reality that we do get judged more. It's just something that's intrinsic. I would love to see change."

On the important stuff in her life ending simultaneously: "When I wrapped the Hunger Games, I wrapped—these movies have been my life for so long, and they had to come first in everything. I was also in a relationship with somebody for five years, and we broke up around the same time that I wrapped those movies. Being 24 was this whole year of, 'Who am I without these movies? Who am I without this man?'"

She also discusses marriage again, but this time, she's like, "Maybe I'll settle down, maybe not. Amy Schumer's enough."

For shenanigans, cheerleading, and J.Law asking Diane if she can spit out a bone on camera, watch the video below.

Chelsea Peng I'm Chelsea Peng, the assistant editor at MarieClaire.com.
This content is created and maintained by a third party, and imported onto this page to help users provide their email addresses. You may be able to find more information about this and similar content at piano.io
Advertisement - Continue Reading Below
More From Celebrity
J.Lo Bares Her Body On Instagram
NYE Outfits to Get You Into the Countdown Spirit
Advertisement - Continue Reading Below
Beyoncé Now Has a Staggering 79 Grammy Nominations
Chrissy and John Spoke About Grieving Baby Jack
Meghan Markle Revealed She Had a Miscarriage
Jewel's Jewelry Collection Is Eclectic and Fun
How to Copy Katie Holmes' Effortless Style
Chrissy's Red Lip Look Is Perfect for the Holidays
Kate's Blazer and Sweater Combo Is So Chic
Princess Diana's Brother Called Out 'The Crown'