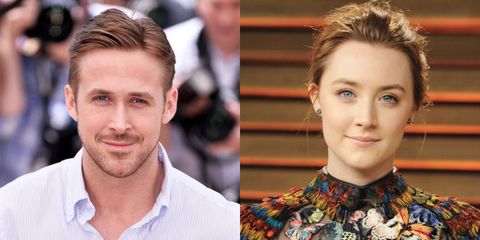 Hey girl, have you ever wondered how to pronounce Saoirse Ronan's name? Much like many women whose monikers are laden with random vowels, the Brooklyn star often has to deal with people who have zero idea how to address her. Is it Sasha? Sersha? Thanks to feminist hero Ryan Gosling, we never have to wonder again.

"It's Ser-sha, like inertia," secret-poet/Dr. Seuss predecessor Ryan helpfully revealed while presenting Saoirse with a Hollywood Film Award in November. Naturally, she was thrilled.

"Someone sent me a photo two weeks later of a cinema in Minnesota, and on the sign in the front it said 'Brooklyn' and then underneath it said, 'Ser-sha, Like Inertia,"' Saoirse told People. "I couldn't believe it. They actually put it on the front of the cinema, so the power of Ryan Gosling is stronger than anything else."

As anyone who's watched Ryan Gosling eat cereal knows, he's clearly a God-like force. "He's like, Jesus or something, like a blond Canadian Jesus," Saoirse concluded.

Yes. This seems accurate. Someone shove Ryan Gosling into a body of water to see if he walks.

Mehera Bonner Contributor Mehera Bonner is a news writer who focuses on celebrities and royals.
This content is created and maintained by a third party, and imported onto this page to help users provide their email addresses. You may be able to find more information about this and similar content at piano.io
Advertisement - Continue Reading Below
More From Celebrity
Meghan Discussed Her Daughter in Vax Live Speech
Prince Harry Talks Digital Pandemic at Vax Live
Advertisement - Continue Reading Below
Harry and Will Have Been Arguing for Months Now
Prince Harry Doesn't Regret His Oprah Interview
Archie Has a Distinct American Accent, Apparently
Hailey Wore a Nude Blazer and Micro Dress
Gabrielle's TikTok About Her Prom Date is So Funny
Victoria Beckham Shuts Down 'Spice World 2' Rumors
Kendall Jenner Shared Her Experience of Anxiety
'The Voice' Star Blake Shelton Opens Up About Gwen