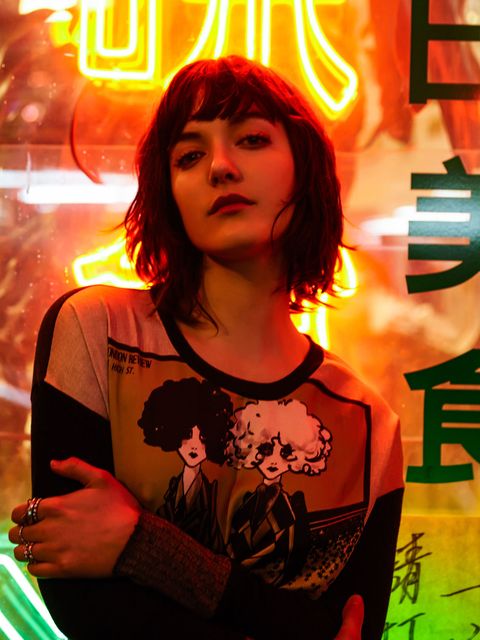 With a sister who's hot off the heels of taking over Justin Bieber's Instagram and friends with the last name "Jenner," Alaia Baldwin is circling one of the most anthropologically fascinating social circles in recent history. It's a group defined by strong friendships and even stronger Instagram game, where life is a weird combination of relatable and inaccessible, and Adidas Stan Smiths lurk around every corner. But 22-year-old Alaia doesn't see the world through filters: modeling is her creative outlet, she studies Chinese medicine in her free time, and she has a deep desire to stay normal—no matter what the last name "Baldwin" brings her way.

"It's important not to act like some *supermodel* or act above anyone else," Alaia tells MarieClaire.com. "I don't want to be in a party and for people to think they can't talk to me. I'd go into a party and talk to your mom, your dad, your dog."

Somewhat ironically, Alaia's relatable personality stems from her totally un-relatable upbringing. Her dad, actor Stephen Baldwin, is as famous for making movies as he is for making headlines, but his personal drama never impacted Alaia's relatively simple life in upstate New York: "We've reached a really crazy time of hyper-celebrity," she says when asked about her family, a topic you might think would be off-limits. "There was a lot of crazy stuff that went down, but it didn't seem like a big deal because my dad was totally unaffected. His attitude was 'there's gonna be stuff about 3,000 other people in the world tomorrow.'"

Truth, but the thing is, the Baldwin brothers didn't grow up in a world where social media has the ability to change your celebrity status overnight. The Baldwin sisters, however, most definitely did (a fact Hailey Baldwin learned the hard way when her relationship with Justin Bieber broke on Instagram). "You have a choice," Alaia says. "You can choose how exposed you do or don't want to be. But then again, once you've reached Justin Bieber status, you've crossed a fine line. People really invade your space, so that's really hard."

"On Instagram you need to seem super cool, like you don't care but you really do care more than anything else in your entire life."

Alaia might not be Bieber-famous, but her last name is Baldwin. And like family friend Kendall Jenner, she says her famous last name makes having a modeling career harder: "It is really frustrating because you're trying to do this on your own, but you still have that connection. For me, it's not that bad because my family's not single-handedly taking over the world at once like the Kardashians."

Compared to the Kendalls and Kylies of the world, Alaia is relatively low-key when it comes to curating her social media platform, mostly because she's worried about exclusivity. "On Instagram you need to seem super cool, like you don't care but you really do care more than anything else in your entire life," she says. "You have to wear Adidas Stan Smiths and take selfies—it's a whole movement. It's a pressure thing, it's stressful. If I was in high school and a group of friends kicked me out and were Instagramming all day, that would be traumatizing."

Scrolling through Alaia's Adidas-less Instagram feed, it's clear that her message is light on #goals and #vibes, and heavy on empowerment and art. To her, modeling isn't just an opportunity to roll with some cool-girl homies—it's a chance to create something beautiful.

"One of my ambitions is to take this career and view it as art," she says. "I think that's sort of a lost concept because everyone is so focused on social media and making money. At the end of the day when I get frustrated and get upset, I remember how much I love getting into character and creating a fashion story."

Viewing modeling through an artistic lens is great, but Alaia knows it's impossible to ignore the industry's problems. "Gigi [Hadid]'s a great example of someone who's breaking the ground—she's commercial and high fashion and doesn't fit the normal standard," she says. "But, people are saying 'oh, Gigi's doing this and the whole world is changing.' Realistically, the whole world is not changing for the rest of us. If I walked into a casting and I had gained ten pounds, I would be told to lose weight."

While Alaia's willing to buckle down on fitness so that she can succeed in a super competitive industry, she eats a balanced diet and is all about using her platform "to represent a healthy model for young girls."