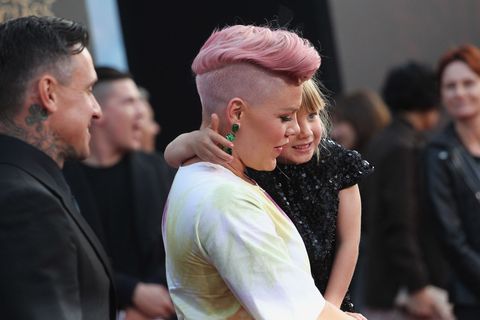 Pink has a 5-year-old daughter named Willow, and like most small children should be, she is obsessed with Matt Damon. More specifically, Matt Damon circa The Martian, where he played a lonely dude who just floated around in space living his best life. What's not to love?

Because she is the world's best mom, Pink celebrated her kid's birthday in the only way that's right: by presenting her with an edible Matt Damon, perched atop a cake. To quote Shakespeare, if eating Matt Damon on a cake is wrong, we don't want to be right.

Matt Damon made it after all

Apparently, little Willow's crush on Matt Damon has been a thing since April. "She asked me if Matt Damon can come to [her birthday party]. I think she has a crush," Pink explained during a radio interview. "She wakes up and rolls over and goes, 'Matt Damon.' I'm like, 'I know.' I'm thinking I'll get her a Matt Damon poster. I've never talked about Matt Damon this much in my life! She made me Google Matt Damon dolls. That was disturbing. Do that sometime, they're very disturbing."

Pink's daughter for president, to be honest.