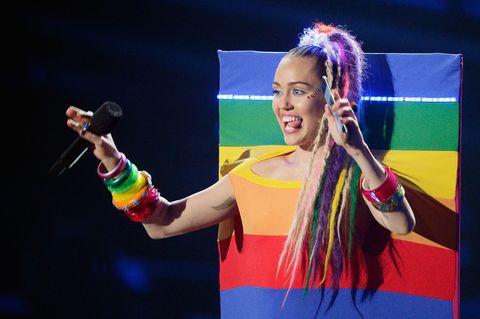 Miley Cyrus is one of the most vocal celebrity activists in the LGBTQ community, and says her own experience with gender identity and sexuality has inspired her to speak out.

"My whole life, I didn't understand my own gender and my own sexuality," Cyrus recently told Variety. "I always hated the word 'bisexual,' because that's even putting me in a box. I don't ever think about someone being a boy or someone being a girl. Also, my nipple pasties and shit never felt sexualized to me. My eyes started opening in the fifth or sixth grade. My first relationship in my life was with a chick. I grew up in a very religious Southern family."

The singer implied that she wasn't always accepted by her family, and explained "My mom is like an '80s rock chick—big blonde hair, big boobs. She loves being a girl. I never felt that way. I know some girls that love getting their nails done. I f*cking hated it. My nails look like shit. I don't wax my eyebrows. I never related to loving being a girl. And then, being a boy didn't sound fun to me. I think the LGBTQ alphabet could continue forever. But there's a 'P' that should happen, for 'pansexual.'"

Cyrus came to terms with her identity while visiting an LGBTQ center in Los Angeles, and realizing that she's neither straight nor gay:

"I started hearing these stories. I saw one human in particular who didn't identify as male or female. Looking at them, they were both beautiful, and sexy, and tough but vulnerable, and feminine but masculine. And I related to that person more than I related to anyone in my life. Even though I may seem very different, people may not see me as neutral as I feel. But I feel very neutral. I think that was the first gender-neutral person I'd ever met. Once I understood my gender more, which was unassigned, then I understood my sexuality more. I was like, 'Oh—that's why I don't feel straight and I don't feel gay. It's because I'm not.'"

"On my tombstone, I didn't want the 'Wrecking Ball' lyrics. I wanted it to be something greater."

Cyrus—who is currently dating Hunger Games star Liam Hemsworth—says she wants people to remember her for being an outspoken advocate of LGBTQ rights: "My empowerment comes from feeling like I have a purpose now. On my tombstone, I didn't want the 'Wrecking Ball' lyrics. I wanted it to be something greater. I'm the only f*cking Disney star who would say I'm pro lesbian and gay, before it was okay to say that."

Mehera Bonner Contributor Mehera Bonner is a news writer who focuses on celebrities and royals.
This content is created and maintained by a third party, and imported onto this page to help users provide their email addresses. You may be able to find more information about this and similar content at piano.io
Advertisement - Continue Reading Below
More From Celebrity
Jessica Biel Talked "Secret COVID Baby" Phineas
Katie Holmes Paired Baggy Jeans With a White Tank
Advertisement - Continue Reading Below
Why Rachel McAdams Turned Down 'Devil Wears Prada'
Did the Queen's Brooch Send a Message?
Jennifer Lopez and Ben Affleck: Everything We Know
What Happens on Katie's Season?
A Look Back at Gwen Stefani & Blake Shelton's Love
Beyoncé Celebrates Twins Rumi and Sir Turning 4
Katie Nails Casual Cool in Jeans, Tee, and Loafers
Gigi Hadid Wore the Coolest Bright Orange Eye Look