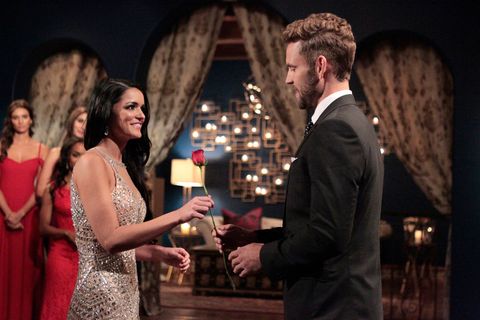 When you think of The Bachelor, you probably don't think of women's issues, sex positivity, or feminism. But the show—which has been increasingly progressive of late—just featured a refreshingly honest conversation about female orgasms, as Nick Viall's contestant Raven Gates admitted she's never had one.

While their conversation was certainly the on-screen version of clickbait, it's important that Raven and Nick actually had an open talk about an issue that's relevant for a lot of women.

"I've never had an orgasm before," Raven told cameras before talking to Nick. "It's really taboo to discuss, but it's important. Maybe I haven't before with my last person because I really didn't trust him. You just have to trust someone to be able to go there."

Later, Raven talked to Nick about the issue, saying, "My ex, who I was intimate with, never made me orgasm." Naturally—because this is The Bachelor—we were left with a cliffhanger, but hopefully next week's episode will give us another dose of honesty and sex positivity.