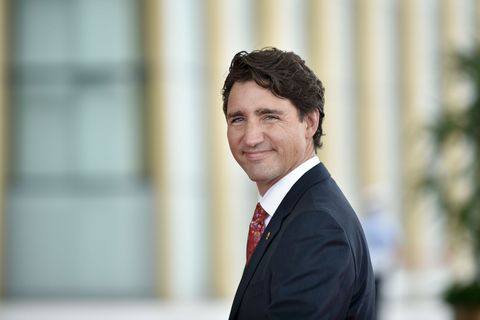 Have you ever wondered what's lurking beneath Justin Trudeau's handsome, feminist exterior? A six-pack and an epic tattoo, turns out.

In case you had forgotten (or perhaps you never realized in the first place), we're here to remind you that the Canadian Prime Minister got a tattoo of planet earth (or as some—probably Trudeau, TBH—call her, Gaia) when he was 23. That's right, guys, a tattoo of the earth. That's how damn much he loves this planet.

So, what's going on with the rest of Trudeau's ink, you ask? He got the planet earth tat as a #youth, and he added a bird to it when he turned 40.

.@MegBergin My tattoo is planet Earth inside a Haida raven. The globe I got when I was 23; the Robert Davidson raven for my 40th birthday.

The bird itself is actually quite symbolic, as Trudeau and his family were made honorary members of the Haida (a tribe indigenous to Canada's Pacific northwest) in 1976.

Question: Do we think Donald Trump secretly has a lower back tattoo, y/n?