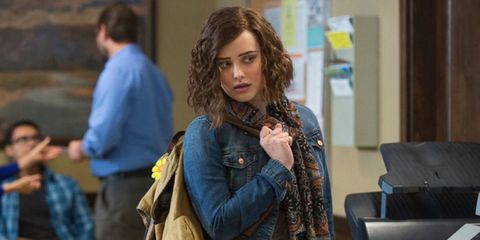 Netflix's 13 Reasons Why has been the subject of intense controversy and debate since its premiere in March.

Selena Gomez, who served as an executive producer on the series, recently weighed in on the backlash it has faced, saying, "We stayed very true to the book and that's initially what [author] Jay Asher created was a beautifully tragic, complicated yet suspenseful story and I think that's what we wanted to do. We wanted to do it justice and, yeah, [the backlash is] gonna come no matter what. It's not an easy subject to talk about, but I'm very fortunate with how it's doing."

Now, indie rock band Car Seat Headrest, which contributed a song to the series' soundtrack, has spoken out against the show, according to E! Online. In a series of tweets posted Saturday, the band implored, "Please don't tell kids how to turn their miserable and hopeless lives into a thrilling and cathartic suicide mission."

Instead, the band encouraged fans to check out a different Selena Gomez project instead: Spring Breakers.

Kayleigh Roberts Kayleigh Roberts is the weekend editor at Marie Claire, covering celebrity and entertainment news, from actual royals like Kate Middleton and Meghan Markle to Hollywood royalty, like Katie Holmes and Chrissy Teigen.
This content is created and maintained by a third party, and imported onto this page to help users provide their email addresses. You may be able to find more information about this and similar content at piano.io
Advertisement - Continue Reading Below
More From Celebrity
Rihanna Takes Out the Trash on Trump's Last Day
Chrissy Teigen Shared a Moving Post About Sobriety
Advertisement - Continue Reading Below
Meghan's Royal Aides to Testify in Her Court Case
Greta Thunberg Hilariously Trolled Trump—Again
Watch Demi Perform During Biden's Inauguration
Joe Biden Follows Chrissy Teigen on Twitter
J.Lo Wore Head-to-Toe Chanel for the Inauguration
The Queen Sent a Private Message to Joe Biden
Lady Gaga's PDA with Boyfriend Michael Polansky
Twitter Reacts to Lady Gaga at the Inauguration