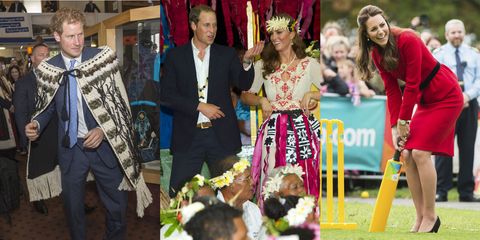 Recently, Prince William had a grand old time in China hamming it up and never once looking like a guy who's had cameras shoved in his face since he was born, practically. The man is a consummate travel professional—as are the Duchess of Cambridge and Prince Harry—and together, they've got the endearing-shenanigans-while-being-respectful thing down cold. Here, we've made a photo album of all the times they were the dorky tourists we've come to know and love.

Prince Harry and the Duke of Cambridge visited the set of Star Wars at Pinewood Studios earlier Tuesday, where they hung out with John Boyega, Daisy Ridley, Mark Hamill, BB8, and this guy.

Before he returns to his normal-person job as an air ambulance pilot Monday, Prince William played polo, schmoozed with Chris Hemsworth, and became the proud owner of some tiny pink Hunter Wellies. (Fine. They're for Princess Charlotte.)

Okay, technically Prince William is in England, but doesn't this pic with Steph Houghton and an infant football shirt remind you of *another* shot featuring a sports star and a jersey? Yup.

Courtesy of Parks and Wildlife Commission NT, Australia
5 of 25

Here is Prince Harry helping a Crocodile Management Team in Australia, uh, manage a 10-foot crocodile. Points of interest: 1) How Australian that first sentence was and 2) No crocodiles were harmed during this wrestling bout because they're a protected species and usually justrelocated when they wander too close to areas populated by humans.

On his final full day in New Zealand, Prince Harry assisted this pint-size princess (not that one) with her shoe. Goodbye, ovaries. It was nice knowing you.

Prince Harry had to cut his first visit to New Zealand short after he was found attempting to abscond with a fringed cape Sunday. (JK. You know he's just playing. Plus it was almost definitely a gift.)

Here they are in Australia pretending to DJ and laughing uproariously because Harry's clearly the only royal who can pull this off.

How much do you want to bet Wills made a dad joke while they were admiring this Aboriginal spear in New Zealand?

His face is all of our faces.

They made her play cricket in New Zealand in heels, and she's still all smiles. What a pro.

TBH, I would look like this too if I were meeting Domo, the mascot of Japan's national public broadcasting organization.

Remember this? A charity worker at the Northside Center for Child Development in Harlem told Kate to keep wrapping, and she gave so much sass it inspired a whole post.

Fine. Technically, they're on the Harry Potter Studio Tour in London, but OMG, is this not the best/most touristy thing you've ever seen?

No, WAIT. DANCING IN TUVALU WINS.

Another time he painted Shaun the Sheep's pupil like the fate of the monarchy depended on it.

HRH P.W. hung out in a ball pen in Japan yesterday and a little girl was like, "Juggle, fool, JUGGLE" while everyone laughed.

I don't think she was impressed.

"I say, this American popcorn tastes much better than what we have back home, Kate. It must be the freedom. Just look at how fluffy it is!" (Remember, they're examining grain courtside at a Brooklyn Nets game. A game that, lest you forget, Beyoncé and Jay Z also attended.)

This happened there too.

And here they are trying fruit snacks for what is most likely the very first time. 'Murica!

Next
The Most Star-Studded Fashion Parties at Coachella 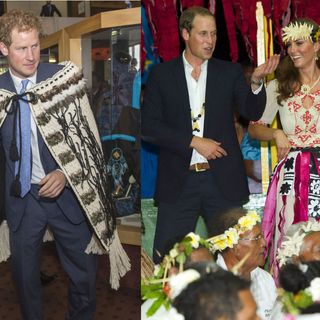 Advertisement - Continue Reading Below
Chelsea Peng I'm Chelsea Peng, the assistant editor at MarieClaire.com.
This content is created and maintained by a third party, and imported onto this page to help users provide their email addresses. You may be able to find more information about this and similar content at piano.io
More From Celebrity
The Queen Displayed a Rare Photo of the Sussexes
Justin Backs Britney After Conservatorship Hearing
Advertisement - Continue Reading Below
Jen Aniston Said a Male 'Friends' Star Was Rude
Jennifer Aniston on "Silly" Love Life Speculation
People Are Devastated by Britney's Revelations
Britney Spears on "Abusive" Conservatorship
'Too Hot to Handle' S2 Was Filmed In Paradise
About That "Sexy Nerd" From 'Too Hot to Handle'
Prince Charles Is Leaving London When Harry Visits
What Happens on Katie's Season?