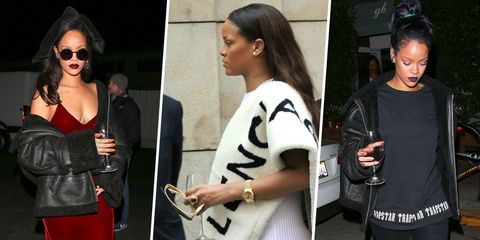 Inspired by MTV editor Josh Edwards' epic Twitter thread, here's a gallery of every time Rihanna's taken some stemware to-go, ranked using our patented F*cks Given detection system.* Follow along, keeping in mind that the less 🍷, the less visible indication that she cares at all.

*literally just me looking at these pics

The body language says "Oops! This might be a particularly dear vintage," while the outfit is doing its best to camouflage its wearer's tendency to casually abscond with crystal.

She could still be building up her glass-nicking confidence. Or she could just be being polite as a stranger in a strange land (England).

TBH, I think you're safe. (Side note: Do you think all the cupholders in her cars are all filled with pilfered glasses?)

Thievery tactic #596: Wear a large, luxury branded stole to establish dominance/show that you've got more than enough collateral to bargain with in case they turn out to be stingy with the glasses.

As Rihanna grows bolder, she doesn't even bother trying to conceal her wine anymore, even though she's got a big coat on. It's just there, out in the open.

So blatant. So insouciant.

You can tell a lot about a person by how she handles a wineglass. For example, you can tell that Rihanna is so accustomed to takeaway wine that she can talk to a woman who is presumably a PR for the event with a glass of it in her hand before just walking off with it.

Who recently grabbed *two* full glasses after a screening and sauntered off into the night? You be the judge.

Next
Why Celebs Are Standing Up for Non-Toxic Beauty 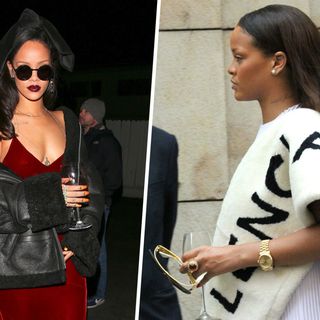