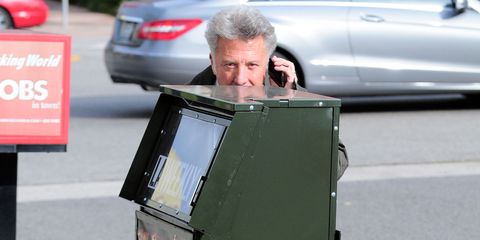 Celebrities and the photographers who stalk them might seem as friendly as lions and blind baby gazelles, but sometimes, they do call a truce and have a bit of fun together. Here, eight times the natural enemies put down their swords and palled around instead.

"I don't need Uber anymore," he said as he canceled his car, ignored stranger danger, and got into a photographer's vehicle. "I just have the paps take me where I wanna go." And they did make it to trainer Harley Pasternak's gym. Absurd but amazing but absurd.

If Alec Baldwin is the Anger archetype of celebrity-paparazzi relations, Dustin Hoffman must be Joy. There's tons of evidence of him goofing around with those who make their living trailing him, but our favorite has to be the Hide and Seek series, in which Hoffman crouches behind various objects, such as trees and newspaper vending machines.

Just some great pics of the Flash actor that got turned into an even better meme.

4 Simon Cowell and David Walliams Go on a Mate Date

Things weren't always so chummy between the American Idol judge and the comedian, but for an elaborate April Fool's prank, they went on what the Mirror called a "mate date," complete with a picnic and a ride on a swan boat.

In a total gracious-lady move, Mother Monster dispensed hugs, autographs, and freaking Chateau Marmont cookies (and soda) to waiting fans and photogs. Class act, that one.

He arrived in board shorts, but after they ducked into their tent, Carrey emerged in his girlfriend's plunging maillot. If it's a show you want, it's a show you'll get, LOL.

7 Ben Stiller and Luke Wilson Ham It Up in Character

Give 'em an award for Best Marketing Ploy for a Movie Franchise. To promote Zoolander 2, the film's stars actually attended and walked in a real Valentino runway show. The paparazzi played right into their hands, and they probably enjoyed the spectacle too.

Never forget when JLaw left a restaurant using her chopsticks as walrus tusks and it made the HOF of any photos ever.

Chelsea Peng I'm Chelsea Peng, the assistant editor at MarieClaire.com.
This content is created and maintained by a third party, and imported onto this page to help users provide their email addresses. You may be able to find more information about this and similar content at piano.io
Advertisement - Continue Reading Below
More From Celebrity
How Kristen Stewart Is Prepping to Play Diana
How to Make the Queen's Favorite Cocktail
Advertisement - Continue Reading Below
The Queen Told Harry to Uphold His Family Values
Twitter Is Thirsting over Prince Harry
Gabrielle Union Just Wore a Daring 2000s Trend
28 ‘Real Housewives’ Who Left The Franchise
Queen Elizabeth Fun Facts
Celebrities Who Don't Use Their Real Names
63 of the Shortest-Lived Celeb Marriages
26 Stars Who Appeared On '90s TV Shows