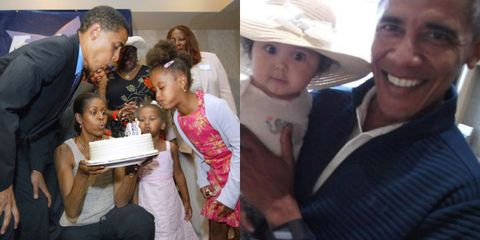 Barack Obama had plenty of heartwarming moments during his eight years in office—and before he was president and after, too. Here are some of the former POTUS' most aww-worthy moments.

Posing for a selfie with mom Jolene Jackinsky and her baby at Anchorage International Airport.

In an adorable throwback picture with his daughters that Michelle Obama shared on Instagram for Father's Day.

Obama tweeted this sweet picture of him and Michelle in honor of Valentine's Days. "Almost 28 years with you, but it always feels new," he wrote.

Absolutely beaming while on vacation in the British Virgin Islands.

Biking with his family while on vacation on Martha's Vineyard.

Celebrating on the golf course at the Farm Neck Golf Club.

At a Petsmart in Alexandria, Virginia with his dog, Bo.

Relaxing with some shaved ice at Island Snow in Kailua, Hawaii.

Eating ice cream on the go while on vacation in Bar Harbor, Maine.

Enjoying an Island Snow shaved ice in Kailua, Hawaii on vacation with his family.

Playing football with Bo on theSouth Lawn of the White House.

Spending time with his family at the Honolulu Zoo in Hawaii.

Celebrating his presidential election win in Grant Park in Chicago.

Riding carnival rides with Malia at the Iowa State Fair.

Taking a break to play Uno with his daughters on the campaign trail.

Waiting with his family for the Senate election results in Chicago.

Celebrating his 43rd birthday with his family. 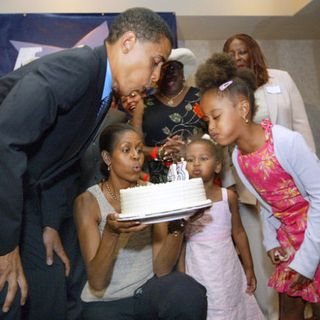