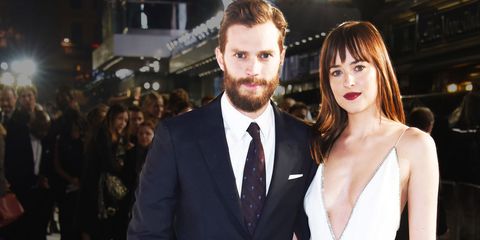 Only a week after the insanely anticipated release of Fifty Shades of Grey—and its subsequent box office domination—ticket sales for the soft-core romance flick have taken a hit, big time.

According to The Hollywood Reporter, the film's box office intake has dropped more than 70 percent in the past week alone—falling from raking in $85 million over its debut on Valentine's Day weekend, to a projected paltry $24.3 mil at the end of this weekend. This past Friday, Fifty Shades made just $7.8 million.

But that's not to say that the motion picture version of E L James's raunchy book hasn't been hugely successful already. It's currently still the top movie at the box office—and as of last Wednesday, it had already earned $300 million globally. It even broke records.

THR also points out that the steep drop in viewership isn't particularly surprising for a "fan-fueled property," noting that 2014's The Fault in Our Stars had a similar fate. Meaning, the Fifty Shades franchise will very likely persevere without an issue.

Still—if you need a shoulder to cry on, Jamie Dornan...we're here for you.