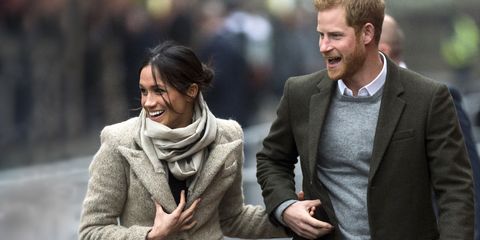 On Saturday May 19, Prince Harry and Meghan Markle will officially tie the knot at St. George's Chapel, Windsor Castle. Since we don't want you to find yourself scrambling on the big day, we're tracking every detail on how to watch the most highly-anticipated event of the year straight from your couch. (It starts early, Americans, so "couch" is probably your ideal vantage point.)

The wedding will be televised in a live segment for the world, which means all media outlets including cable TV can broadcast the event. A spokesperson for the royal couple has also confirmed this. This isn't a surprise, seeing as Princess Diana and Prince Charles had their wedding televised in 1981, as did the Duke and Duchess of Cambridge in 2011 (with more than 23 million viewers in the U.S. alone).

The wedding service will begin at noon London time (which means 7 a.m. EST/4 a.m. PST). At 1 p.m. the married couple will go on a carriage procession from St. George's Chapel through Windsor Town returning to Windsor Castle. After this, Harry and Meghan will have not one but two receptions—one immediately after the service hosted by the Queen and one in the evening hosted by Prince Charles (though the receptions likely won't be documented for the public to see).

Here's where and when you can watch the festivities:

TODAY's Savannah Guthrie and Hoda Kotb will begin live coverage of the royal wedding at 4:30 a.m. EST from a "special vantage point overseeing the castle." They'll also live stream it on TODAY.com, Facebook, Twitter and YouTube.

ABC News and Good Morning America will broadcast with live updates from Windsor, England, from 5 a.m. to 10 a.m. EST. This will be available to stream on ABCNews.com and GoodMorningAmerica.com.

BBC's Dermot O'Leary and Scarlett Moffatt will be leading the network's royal coverage alongside Kirsty Young and Huw Edwards. Young and O'Leary will be "based by the moat outside Windsor Castle, while Edwards will be on the roof of the Guard Room within the castle walls." You can access the livestream for the day of here.

E! will begin their five-hour live broadcast the morning of the wedding at 5 a.m. EST.

PBS will host a five-part nightly special with Meredith Viera and cover the royal wedding live as well. You can find out more about the special here. PBS will broadcast The Royal Wedding: Prince Harry & Meghan Markle, with live coverage from the BBC, beginning at 4 a.m. EST.

Live coverage will begin on FOX & Friends’ beginning at 5 a.m. EST and will be followed by main coverage on the network starting at 6 a.m.

Bookmark this tab for later, and check back for more updates as we continue to track the royal wedding. In the meantime, keep up with all-things royal here and find out everything you need to know about the wedding below.

Related Story
Your Official Guide to Meghan and Harry's Wedding
Rachel Epstein Associate Digital Editor Rachel Epstein is the associate editor at Marie Claire, where she covers culture, lifestyle, and politics.
This content is created and maintained by a third party, and imported onto this page to help users provide their email addresses. You may be able to find more information about this and similar content at piano.io
Advertisement - Continue Reading Below
More From The Ultimate Guide to the Royal Family
All the Black Friday Sales Royal Fans Need to Shop
Meghan's Mom Is Helping Her Heal After Miscarriage
Advertisement - Continue Reading Below
Duchess Kate Looks Stunning in a Pink Suit
Chrissy Defended Meghan's Miscarriage Op-Ed
Royals Knew of Meghan's Miscarriage Before Op-Ed
Royals Feel "Great Sadness" for Meghan and Harry
Kristen Stewart Is "Protective" of Princess Diana
How Meghan & Harry Are Spending Thanksgiving 2020
How to Make the Queen's Boozy Christmas Pudding
Will & Kate's Kids Have Written Letters to Santa