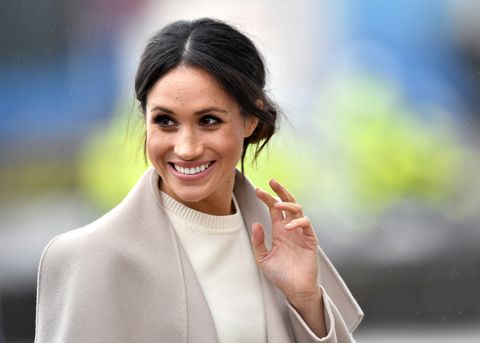 Meghan Markle is exactly one month out from her royal wedding to Prince Harry. The actress (well, former actress) will join the British royal family on May 19 during what is sure to be a beautiful ceremony at St. George's Chapel in Windsor.

The big day will mark Meghan's second marriage and her third wedding—if you count the wedding her character, Rachel, has in the Suits finale, that is. Pictures from Meghan's fictional wedding are here and it looks like a princess fairy tale itself:

As Rachel, Meghan wore a lacy, full-length ball gown with a plunging v-neck and a thin black belt. Of course, all that seeing this dress makes royal fans think is: BUT WHAT WILL YOUR REAL WEDDING DRESS LOOK LIKE, MEGHAN?

Meghan's onscreen wedding is decorated with hanging lights and an altar of flowers and vines. It's so romantic, it almost hurts to look at for too long (almost).

If Prince William and Kate Middleton's 2011 ceremony is any indication, however, Harry and Meghan's real-life wedding will likely be much more traditional:

Here's a look inside St. George's Chapel, where the couple will wed, to help fuel your imagination:

The Suits wedding marks a huge occasion for Meghan's character, Rachel Zane, who is finally marrying her onscreen love, Mike. It also marks a huge occasion for Meghan; it will likely be her last professional appearance as an actress. In November 2017, she announced her decision to retire from acting to focus on royal duties after marrying Prince Harry.

Kayleigh Roberts Contributor Kayleigh Roberts is the weekend editor at Marie Claire, covering celebrity and entertainment news, from actual royals like Kate Middleton and Meghan Markle to Hollywood royalty, like Katie Holmes and Chrissy Teigen.
Advertisement - Continue Reading Below
More From Culture
Who Is 'Bachelor' Contestant Victoria Fuller?
Does 'Bachelor's Madison Prewett Self-Eliminate?
Advertisement - Continue Reading Below
Who Is 'Bachelor' Peter's Mom Talking About?
Who Is 'Bachelor' Contestant Madison Prewett?
How 'Bachelor' Peter Got That Scar on His Face
Read an Excerpt from 'Anna K,' Our Book Club Pick
How to Join Marie Claire's Online Book Club
'The Bachelor' Has Already Finished His Season
Shonda Rhimes' New Netflix Show Will Be Steamy
Jennifer Lawrence Will Star In a Netflix Film