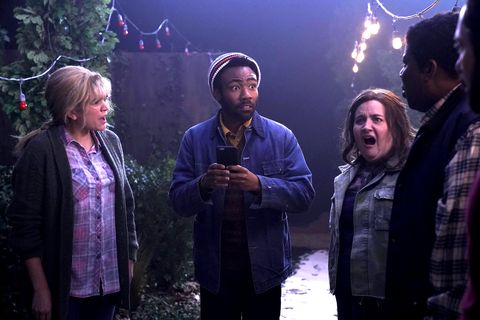 Last night, Saturday Night Live returned after a nearly month-long hiatus and it had a lot to address. After a biting cold open that incorporated several cast members as well as several surprise celebrity guests, SNL brought it with a digital short that expertly parodied the Kanye West drama unfolding on Twitter through the lens of John Krasinski's hit horror movie A Quiet Place.

In the sketch, titled "A Kanye Place," host Donald Glover is joined by cast members Kenan Thompson, Beck Bennett, Aidy Bryant, and Cecily Strong. The scene is set in the world of A Quiet Place, where blind monsters with super hearing are hunting humans. The group creeps along quietly—until Glover's character sees that Kanye is tweeting and he can't help but talk about it.

"Kanye just tweeted," Glover's character says. "He said he would have voted for Trump."

The friends try to stay quiet, but when Glover gets to the picture of West's signed MAGA hat, Thompson's character exclaims, "Oh, come on, Kanye!" He's then promptly eaten by a monster, of course.

Other members of the party are taken out after voicing confusion over West's "poopity scoop" lyrics, his (and Modern Family star Jesse Tyler Ferguson's) appearance at Chrissy Teigen's baby shower, and of course, West's claim that slavery was a choice.

The sketch ends with Glover as the last man standing, in a bunker similar to the one the family uses as HQ in the movie. On the board, instead of theories about the monster, there are scribbled notes about Kanye and his web of celebrity friends and his erratic behavior. Instead of watching the surveillance video, Glover switches to TMZ footage of West talking about slavery and, well, the monsters win.

Watch the full sketch below:

This content is imported from YouTube. You may be able to find the same content in another format, or you may be able to find more information, at their web site.
Kayleigh Roberts Contributor Kayleigh Roberts is the weekend editor at Marie Claire, covering celebrity and entertainment news, from actual royals like Kate Middleton and Meghan Markle to Hollywood royalty, like Katie Holmes and Chrissy Teigen.
This content is created and maintained by a third party, and imported onto this page to help users provide their email addresses. You may be able to find more information about this and similar content at piano.io
Advertisement - Continue Reading Below
More From Culture
53 Wild and Completely Iconic Vintage Porn Films
Dale Moss Is a Super Important 'Bachelorette' Star
Advertisement - Continue Reading Below
It's Been a Weird Year for 'The Bachelorette'
Political Books to Read Ahead of Election Day
The Sexiest Movies on Amazon Prime
HBO Is Giving Fans 2 Special 'Euphoria' Episodes
What to Know About Tayshia's 'Bachelorette' Cast
Clare Crawley's 'Bachelorette' Cast Is Out
Lessons From Frida Kahlo in Embracing My Culture
19 Documentaries on Netflix to Watch Right Now