Today's Top Stories
1
What Biden Has Pledged to Do In His First 100 Days
2
Listen to the Best New Love Songs of 2021 (So Far)
3
Moving Forward: To Heal America, We Need the ERA
4
Matt James' 'Bachelor' Cast: Everything We Know
5
How Marie Kondo Does Self-Care 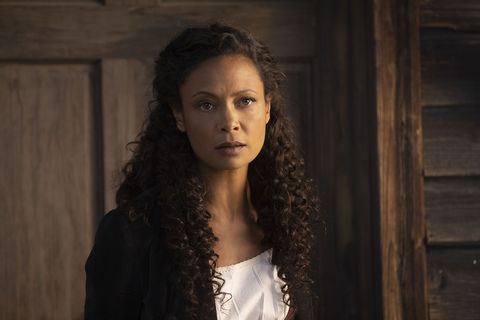 This post contains SO MANY SPOILERS for Westworld Season 2, Episode 7, ""Les Écorchés."

If you've been thinking, "Man Westworld has really slowed down in Season 2," then watch "Les Écorchés" and get back to us. The seventh episode of the season was insane. Just nonstop insane. Nearly every scene contains a moment that makes you go, "Wait...no. But, like, actually no, right? ...Right? Wait THIS IS ACTUALLY HAPPENING? WHAT IS THE FUTURE OF THIS SHOW?"

But, you know, in a good way. And a sometimes devastating way. Let's dig right in to the episode's most mind-exploding moments, ranked from "Oh, didn't see that coming" to "WHY, HBO? WHYYYYYYYYYYYY?" Since almost the entire episode takes place during the same timeline (the two-ish weeks ago one), note that this is all happening more or less simultaneously and we can't rely on wonky timeline theories to undo some of this horror.

Ford revealing that Dolores was instrumental in programming Bernard.

In last week's episode, Bernard put himself right into The Cradle to try to fix the glitch that's messing with the parks. In the final moment's of that episode, Ford is like "hey, old friend," which was a pretty strong indication that he was said glitch.

This week's episode explicitly confirmed that, complete with Ford monologuing about Delos' master plan and why he decided to put his own consciousness into The Cradle rather than directly into a host (based on the many, many failed experiments with James Delos, Ford knew that his mind would deteriorate in a matter of days in a host, but that it could chill indefinitely in The Cradle).

During the monologue portion of the evening, Ford explained Bernard's creation. He's not Arnold—not in the way that James Delos bot was supposed to be James Delos or the way that Cradle Ford is Ford, anyway. Because Arnold died before the idea to transfer humans into hosts in the quest for eternal life, Ford rebuilt him from memories—his own, and Dolores'. As such, Dolores was instrumental in programming the Bernard we know and love/pity today. Ford didn't put him into Delos until he was able to fool Dolores, which was not easy.

So, the hosts in Westworld (and Shogun World and Raj World) are no longer bound by their narratives. That does not mean, however, that they all realize the extent of what's going on. Maeve and Dolores are special in that they realize they're hosts and they know what that means, for their pasts, presents, and futures.

Most of the hosts are just like kids without rules. They still think they're cowboys and outlaws and what have you in the old west (or samurai warriors or whatever is appropriate for their park). They still think the world works more or less the way they've been told, they're just going off-script and making the stories up as they go along.

This is why Maeve is able to control most of the other hosts. They don't realize they're hosts, so she just taps into the hive mind and overrides their programming like a Delos employee saying "cease all motor functions." She learns in a very pivotal moment (more on that later) that Lawrence, the Man in Black's lackey/sidekick/host BFF, is the latest host to become sentient. She cannot control him.

This isn't like, end of the world shocking, just unexpected. Way to go, Lawrence.

This doesn't last long for Lawrence. He dies almost immediately after discovering he can control his own destiny, shot down by Delos security.

We know Dolores goes HAM to get what she wants and what she wants more than anything is her daddy back. Like Maeve, she's very much affected by the relationships she was written to have in her narratives. It was unfortunate for Delos that they chose Peter Abernathy as the vessel for their "failsafe on a failsafe" of important IP to be smuggled out of the park. Dolores knows that her father's head holds "the key" (probably to The Door, right?) and that she needs to get that out of his head not just for tactical reasons (but for those too), but to help him be himself.

The only way to get it out? Cut it out. Wrong answer, Charlotte Hale. Dolores promises to give an eye for an eye—but every other piece first. She then picks up a skull saw and comes *thisclose* to cutting into Charlotte's head (a rare and well-timed lucid moment from Papa Abernathy saves Charlotte's life).

No, Dolores didn't actually do it. But, watching the episode, you 100 percent believe she's going to and it's intense.

Ford taking free will back from the hosts and taking over Bernard's mind.

So, remember how Bernard was hanging out in The Cradle with a maniacal, monologuing Ford? Well, For decides he wants out of the The Cradle (more on why next) and hitches a ride with Bernard, who he proceeds to control. He tells Bernard explicitly that he's taking back his free will and it's not totally clear yet if that applies to all of the other hosts, too.

Ford immediately forces Bernard to commit murders and not be the robot he wants to be. It's actually devastatingly sad.

Dolores and company blowing up the backups of the hosts.

As Bernard sums it up during his Cradle chat with Ford, the hosts were the control and the guests were the variable. Delos wasn't trying to make the hosts more and more human, they were trying to deconstruct the human mind by collecting unfiltered data about the human condition. Because Delos parks promise "life without limits," guests don't limit or censor themselves at all with the hosts. They feel safe to be the truest versions of themselves and Delos has been storing that data to build better immortal host versions of eccentric, dying billionaires.

All of Delos' data was stored in The Cradle, specifically the hosts' backups. Without the backups, the hosts really are more or less mortal—they can't be brought back from the dead with their memories and personality in tact without them. So Dolores has Angela blow up The Cradle from within, thus freeing the hosts from Delos. They exist only in their own bodies now (and, you know, probably in the key inside Peter Abernathy's head), so Delos can't just murder and revive them on a whim anymore.

Maeve being gunned down and almost dying.

In what was easily the most tense and heart-stopping scene of the episode, Maeve was shot, multiple times, by Delos security and only saved because Lee happened to be like "Wait, no, I know I called you all to save me, but she's different than the other robots so please stop killing her."

By the end of the episode, Maeve is on her death bed with no backup around to save her and Dolores is offering to mercy kill her. Maeve refuses because she's promised to save her daughter from Ghost Nation.

The Man in Black being gunned down almost dying.

Maeve is shot down as she's about to finish off the Man in Black, AKA William, who she shoots several times (and mind controls other hosts to shoot—including an attempt to get Lawrence to finish him off, which results in the reveal that Lawrence is self-aware). These shots aren't flesh wounds. Yes, he takes some survivable shots to places like his shoulder and leg, but he also takes at least once bullet right in the chest.

We don't actually see William die on screen (he's hiding and barely clinging to life when the Delos security crew drives off with Maeve and Lee), so he's probably not actually dead. But then again, he should be dead. Like, medically. This almost/maybe death is only more shocking than Maeve's because when she is first shot, Angela hasn't blown up The Cradle and her chance at robot resurrection.

William's daughter, who he blew off last week, will probably find him and save him in the next episode, but if she doesn't and Ed Harris just dies before the end of Season 2 and without finding The Door, I won't know what to think about this show anymore.

Kayleigh Roberts Contributor Kayleigh Roberts is the weekend editor at Marie Claire, covering celebrity and entertainment news, from actual royals like Kate Middleton and Meghan Markle to Hollywood royalty, like Katie Holmes and Chrissy Teigen.
This content is created and maintained by a third party, and imported onto this page to help users provide their email addresses. You may be able to find more information about this and similar content at piano.io
Advertisement - Continue Reading Below
More From Culture
The Sexiest New Movies of the Year
A Look Back at Princess Anne's Life in Photos
Advertisement - Continue Reading Below
Where Is the Cast of 'Gilmore Girls' Now?
'The Bachelor' Is Back!
Who Is "Queen" Victoria on 'The Bachelor'?
Matt James' 'Bachelor' Cast: Everything We Know
Get to Know Serena Pitt From 'The Bachelor'
The Best Lesbian Movies Streaming on Netflix
Listen to the Best New Love Songs of 2021 (So Far)
Who Is Christine Chiu on Netflix's 'Bling Empire'?