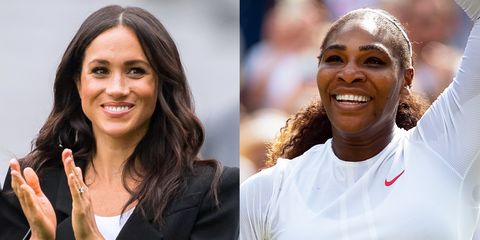 Still reeling from Kate Middleton's surprise appearance at RAF Centenary earlier this week? Same—which is why I'm kinda, sorta freaking out about the fact that the Duchess is reportedly attending Wimbledon tomorrow with Meghan Markle. In the ladies' first-ever solo outing, Middleton and Markle will watch Serena Williams battle it out in the women's singles final. Williams gave birth to her first child, daughter Alexis, just 10-and-a-half months ago, and is already back to being the best in the sport. Casual.

Kensington Palace took to Twitter yesterday to confirm the news of the Duchess' appearance. "The Duchess of Cambridge, @Wimbledon Patron, and The Duchess of Sussex will attend the Ladies' Singles Final on Saturday 14th July #Wimbledon," the post read. And if a one-on-one with Middleton and Markle wasn't iconic enough in itself, Meghan is close friends with Serena Williams, which means the ladies will (likely) bring their cheering A-game.

The Duchess of Cambridge, @Wimbledon Patron, and The Duchess of Sussex will attend the Ladies' Singles Final on Saturday 14th July #Wimbledon

In her now-defunct blog, The Tig, Meghan repeatedly cited Williams as one of her best friends. "She quickly became a confidante I would text when I was traveling, the friend I would rally around for her tennis matches, and the down to earth chick I was able to grab lunch with just a couple weeks ago in Toronto," she wrote. Williams attended Prince Harry and Meghan's wedding in May.

Here's hoping we get some awesome (read: non-robotic) photo ops of Meghan and Kate on Saturday! And good luck to Serena!

Related Story
Meghan and Kate Look Elegant for RAF Centenary
This content is created and maintained by a third party, and imported onto this page to help users provide their email addresses. You may be able to find more information about this and similar content at piano.io
Advertisement - Continue Reading Below
More From The Ultimate Guide to the Royal Family
Harry & William Won't See Eye-to-Eye Any Time Soon
Harry & Meghan Won't Throw the Queen Under the Bus
Advertisement - Continue Reading Below
Harry & Meghan Have Nothing to Lose in Oprah Chat
Meghan Didn't Need Prince Harry to Be Wealthy
What to Wear to Meet Queen E, According to Celebs
Meghan in New Clip: Royal Family Is "Different"
Is Harry & Meghan's Archewell Update a Royal Diss?
Why Is the Royal Family Called "The Firm?"
Palace Is Looking Into Meghan Bullying Allegations
Meghan & Eugenie Are Still Close After Royal Exit