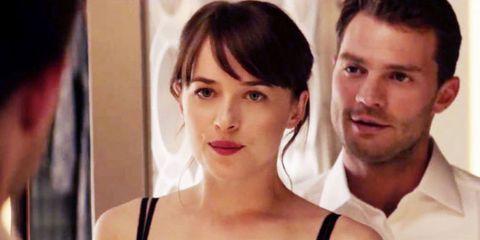 1. The ridiculously titled books published by Seattle Independent Press. Dodging the Blows is right on the money with respect to Christian's sexual preferences, but what in the world is The Last Typist?

2. This dossier Christian has on Ana. She has $683.16 in her bank account, in case you were wondering. Also, her political affiliation is listed as "none found," which must mean that she's never voted in her life.

4. Jack Hyde, Ana's disgusting boss. He's in the trailer longer than Elena, but if you haven't read the books, you might have found yourself wondering who this guy is and why he's acting like such a creep to Ana. Spoiler alert: Christian is not a fan.

5. Whatever this teddy bear poster at the masquerade ball is. This is probably a poster for the charity that will get proceeds from the ball, but for now just pretend it's a bizarre artwork the Greys are auctioning off.

6. Christian's pommel horse. Does he actually use this to work out, or is he just keeping it around for those times when Danell Levya comes over?

7. Ana's portrait. Taken by José, her friend who just won't accept that she's just not that into him. Christian has a boat and a helicopter, buddy. You never had a chance.

8. Rita Ora! She really is in the trailer, right there in that family portrait. Here's hoping Mia will offer her thoughts on The Last Typist ASAP.

9. This hideous painting in the bathroom. I know it's hard to focus on with that shower sex happening just to the right of it, but seriously, what is this? It looks like it belongs on the wall of a restaurant you've never actually been inside of because you only get delivery from it when you're hungover.

10. This casual head sculpture in Christian's office. It's not just his sexual tastes that are singular.

11. This sad jewelry tree in Ana's bedroom. Maybe Christian will upgrade her to a real jewelry box now that he's buying her real diamonds.

12. The sign in Ana's kitchen that says, "STOP MOVING." Maybe it also says "DON'T" and it's just cut out of the frame, but it's a lot more fun to imagine that Ana is so high-strung that she needs a kitchen sign to remind her to breathe.

Someone please give this man a raise.