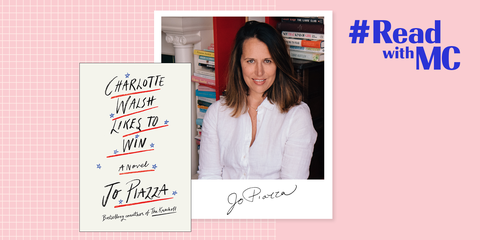 Welcome to MarieClaire.com's Q&A author series—the spot where we ask the #ReadwithMC author-of-the-month five burning questions about her latest book. This month, we're reading Charlotte Walsh Likes to Win by award-winning journalist and bestselling author Jo Piazza. If you're interested in the novel and looking for some friends to talk about it with, find out how to participate in MarieClaire.com's new interactive monthly book club here.

Jo Piazza's newest book, Charlotte Walsh Likes to Win, is a timely story of political ambition, marriage, sexual politics, and what it takes for a woman to run for office today. It's required reading as the 2018 midterm election approaches, especially when women like Alexandria Ocasio-Cortez and Christine Hallquist are fearlessly running—and winning.

Here, Piazza discusses the importance of her novel and why she's "sick of writing about rich white ladies who live in New York."

Marie Claire: What inspired you to write Charlotte Walsh Likes to Win?

Jo Piazza: I started to think about writing it before the 2016 election when I was watching how the media was covering not just "the woman candidate," but all women candidates. I wanted to use fiction to show not only how differently they're covered and treated on the campaign trail, but how it's five times harder for a woman to run than a man.

I wanted to show that very honestly, too, because all politicians are very polished and they only speak in soundbites. I wanted to get behind the scenes and dig into the emotion behind that. Then the election happened, and it felt even more imperative. I genuinely believe that Hollywood, in terms of TV and movies and popular fiction, has completely failed women by not creating enough women characters who lead, who are ambitious, and who wear their ambition with pride.

I wanted to flip that on its head, so it was very important for me to show a female character who wasn't just running for office because her husband couldn't run, or because she had fallen into it. That's how I created Charlotte.

MC: If you could be one character in the book, who would you be?

JP: It's so hard. I go back and forth every single day about who my favorite character is, but I think Roz and Cara. I love them so much. Charlotte is great, but everyone loves Charlotte. Roz and Cara were my favorite characters to write because it was very important for me to show an older generation of women and how hard [running for office] has been for a long time. It was also important for me to show different socioeconomic classes of women.

I chose Pennsylvania as the setting because it's genuinely a microcosm of the United States. You have the urban elite areas with an Ivy League university, you have the rural poor, you have the working class who literally, just a generation ago, had the factories stolen from them. I'm also sick of writing about rich white ladies who live in New York. My family grew up in northeastern Pennsylvania and it was incredible to get to write characters like the kinds of people my family grew up with.

It was important for me to show a woman character who wasn't just running for office because her husband couldn't run, or because she had fallen into it.

MC: Who would play the main characters in a movie? Cast your protagonist and antagonist.

JP: This is a tricky question for me to answer right now because I actually know who's going to play Charlotte (we just signed the contract for the television show!). It's the perfect female casting. I'll be able to give you more details shortly.

I've had women from very rural farmers to women who have their own family members dealing with the opioid crisis in the rural south come up to me and say, "Thank you for showing a very real female character who does lead and is opening the eyes of people the way they need to be opened."

Other comments I'm getting in person and on social media are people saying, "I'm not that interested in politics at all, but I picked up this book because I thought it looked like a good book and now I'm really interested in finding out which women are running." Other women are like, "This gave me a blueprint of how I could do this." That's why I wanted to include all of the different organizations in the back of the book that could help women run for office.

You can purchase a copy of Charlotte Walsh Likes to Win here.

Related Story
How to Join Marie Claire's Virtual Book Club
This content is created and maintained by a third party, and imported onto this page to help users provide their email addresses. You may be able to find more information about this and similar content at piano.io
Advertisement - Continue Reading Below
More From The 2018 Midterm Elections
One Week Post-Midterms Here's What We Know
How Ilhan Omar's Speech Started Is Important
Advertisement - Continue Reading Below
You Should Get a Dog! A Retired Greyhound!
What the Election Results Mean for Abortion
Women Won Big on Tuesday. Now Let's Get to Work
Deb Haaland Will Rep Indigenous People Nationwide
The Greatest Feminist Wins of the Midterms
Gretchen Whitmer Is Ready for the Top Job
Every Celebrity Who Voted in the 2018 Midterms
30 Celebrities Who Have Endorsed Politicians