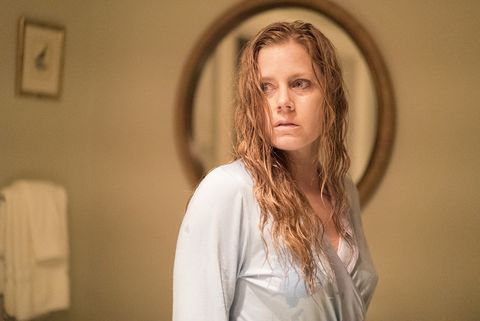 This is a recap for the sixth episode of Sharp Objects, which means there are SPOILERS ahead. If you haven’t seen the episode and don’t want to know what happened, come back once you’ve seen it. You've been warned. A recap of last week's episode can be found here.

From the first few scenes of the first episode of Sharp Objects, it was clear that any thoughts of this being the next juicy, fun, Big Little Lies-ish viewing experience should be thrown out the window. This was far more first season of True Detective, with grit and gore and the kind of hereditary violence that’s all over our screens this year.

But from the first episode, it seemed like there a morality specific to the town of Wind Gap: Girls are innocent little babies until they’re too old to be protected, at which case they’re irreversibly labeled. Camille was a “slut,” Amma is a “bad girl,” and the dead girls were angels because they were dead. This made Amma, within the context of the show, extremely compelling: She had to play into the good girl persona at home—both a result of societal pressure and, we learned last week, her mother’s pathology—and was wild outside of it. But the more we got to know her and see how truly suffocating Wind Gap was (Camille mentions that smart girls get out of Wind Gap), the more we started to empathize with Amma. Though she could be difficult and unpredictable, she was also clearly being stifled.

Which is what made that finale, to me, so frustrating! I know that it’s following the book (I decided not to read it before starting following the show), but I felt like the last ten seconds of last night’s finale ended up undoing the majority of the work I thought the season was putting in.

Let’s recap, briefly: Camille goes to confront her mother after learning that Adora may have killed her younger sister. Once home, though, she makes the choice to submit to Adora’s Munchausen syndrome by proxy in a bid to save Amma from the same fate, becoming so seriously poisoned that she’s unable to stand. Even so, it’s the only time Adora ever treats her like a daughter. Amma, who we later learn had built up a tolerance to Adora’s special “medicine” over the years, is okay enough to go get help when Camille sends her to and the Wind Gap police eventually get to the house. There, Detective Richard finds Camille practically catatonic, but saves her and Amma while the other police arrest Adora. They also fine a pair of pruning shears that match the blood of the murdered girls. Adora is arrested, and Richard visits Camille in the hospital to apologize. "Dick," Amma whispers as he walks away.

Already there are some issues here. Though it’s never really explained (did I miss something?), it sort of seems like we’re to believe Adora’s Munchausen syndrome by proxy is responsible for her murdering Ann and Natalie. In the montage, though she pleads not guilty, she’s clearly convicted and sent off to jail. But it’s never really explained what her motives would have been, or why everyone in town is so ready to believe that Adora did it. Also, after all of that, we're not going to get any more of Richard's storyline?!

Now to the last half of the episode: Over lilting piano music, we see Camille setting up her home in St. Louis to make it comfortable for Amma. Amma meets the downstairs neighbor and they become friends, skating and laughing and playing with the dollhouse. They go to their mother’s trial, they say goodbye to Allen (who stands there in shock). Amma adjusts to life in St. Louis and visits her mother in jail. We hear the piece that Camille wrote, a personal essay that her editor loves. The editor and his wife have also become surrogate family to Amma, as well as Camille.

Then, the mother of Amma’s new friend knocks on Camille’s door and asks if she’s seen her. Camille says she thinks the girls went to the pool, and it’s revealed the girls had their “first little fight.” Camille says she’ll let her know and then, hunching down over the dollhouse, notices for the first time the floor of Adora’s room. (Recall that Adora was very proud that her floor was made of ivory.) In Amma’s miniature version, the floor is made of something similar. Inspecting it, Camille realizes that it’s teeth—like the teeth taken out of the mouths of the murdered girls—just as Amma comes home. “Don’t tell Mama,” she says, and then the credits roll.

I admit, I gasped. If you stayed past that scene, though, you may have seen the mid-credit glimpses, in flashback, of Amma going wildly—and, to be honest, uncharacteristically—violent, beating the crap out of Natalie and Ann. Maybe it’s because this ending seems to be a clear set-up for a second season that, likely, will not arrive, but to me, that shocking cliffhanger was still a little unfulfilling.

For one thing, I got the sense throughout the series that viewers were supposed to see Wind Gap as a place where smart girls had to get out or else be stuck there forever. The labels put on young women, and even adult women (remember how, when Richard walked in on Camille and John Keene, he called her a “slut” and a “drunk”?) are meant to keep them afraid to step out of the good girl outline drawn for them. Because that seemed to be the morality Sharp Objects built, the one by which we were supposed to measure all characters, and because Camille and Amma so defied any attempts to label them, it felt inevitable that they would be able to escape that trajectory for themselves.

But by making Amma the killer, not only of her new friend but also, I suppose, of the other two girls, the show ended up taking the side of the labels, suggesting that they exist to hide something much worse. Following Amma’s progression throughout the series, she goes from terrible to pitiable. You want her to be okay, you’re relieved when Camille tries to save her, and though she can be a little dark, there’s nothing in her that smacks of the rage we’re led to believe the murderer of the little girls killed possessed, much less the kind she displays in the mid-credit scene. (She yanked her friends’ teeth out of their dead faces? I mean, come on!) The show presented an unlikable, complicated character in Amma, then meticulously gave her enough texture and depth to become endearing despite her obvious flaws, and then, in a few seconds, undid all that storytelling to just say, "Psych! She was evil the whole time!" I guess my question is: Why put in the legwork?

I’ve heard this ending matches a point in the book, but isn't how the book actually ends. I think I’m going to have to start reading it to see if it reshapes how I feel about this season finale. The show itself is a complicated, dark journey and I don’t blame Amy Adams for wanting to explore different material—I can’t imagine what a role like this takes out of an actress—but I also really want more closure than that season (series?) finale provided. So many unanswered questions!

Anyway, if Amy Adams and Patricia Clarkson don’t get all the awards come Emmy season, I will be very disappointed.

This content is created and maintained by a third party, and imported onto this page to help users provide their email addresses. You may be able to find more information about this and similar content at piano.io
Advertisement - Continue Reading Below
More From Culture
It's Time To Binge Hulu's Best Documentaries
When Will 'The Crown' Season 5 Be on Netflix?
Advertisement - Continue Reading Below
'The Undoing' Season 2: Everything We Know
Cute Gift Ideas for Every Woman in Your Life
'The Undoing' Differs Sharply From the Book
'The Undoing' Is Packed With Stars
Differences Between 'The Undoing' Book and Novel
It's Been a Weird Year for 'The Bachelorette'
Did Princess Diana Really Dance to 'Uptown Girl'?
'Bachelorette' Frontrunner Brendan Is an Actor