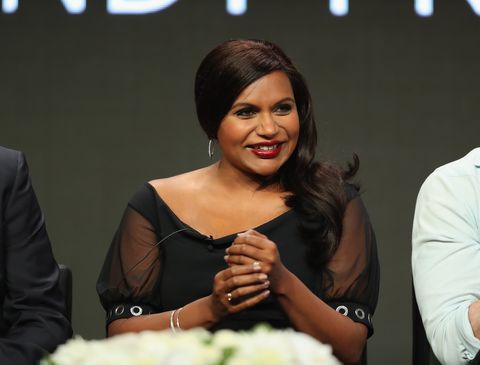 2019 has been the year of television and film remakes—just six months into the year, we've already seen reboots like What Men Want (a spin on the 2000 What Women Want) and Aladdin, and contemporary spin on favorites like The Lion King and Shaft are set to hit the theaters this summer. This summer, British flick Four Weddings and a Funeral will also be getting a 2019 facelift, courtesy of actress and producer Mindy Kaling.

The original story follows the complicated situationship of lifelong bachelor Charles (Hugh Grant) and hard-to-pin-down Carrie (Andie MacDowell). Our couple's first meet-cute takes place at a wedding, but they run into each other at three other weddings after that, including Carrie's own nuptials to another man! Four Weddings and a Funeral received critical acclaim after its 1994 release; the film was nominated for numerous Academy Awards and took home trophies from the BAFTA Awards as well as the Globe Globes. To this day, the movie still tops many "best romantic comedies of all time" lists, and for good reason—it's got everything that rom-coms should be made of.

A real life romantic comedy aficionado, Kaling wants to give the cult classic what she believes is a much needed update. She's no stranger to quirky love stories—the 39-year-old played Dr. Mindy Lahiri, a serial dater and successful OB/GYN in in the Lower East Side, on the Fox (later Hulu) original series The Mindy Project—so her expertise will definitely come in handy for this reboot.

From the lead cast to the premiere date, here's everything we know about the Four Weddings and a Funeral remake so far.

It's set to air on Hulu.

Kaling's relationship with subscription video on demand service Hulu began when Fox dropped The Mindy Project after three seasons. Hulu picked up the series, and it ran for two more seasons on the streaming giant. Truly impressed by Kaling's creativity and ability to create consistently good scripts, they decided to partner with her once more for the 10-episode limited series. Hulu's Head of content Craig Erwich had nothing but high praise for Kaling in a 2018 interview with The Hollywood Reporter. "Mindy embodies Hulu. She’s funny, she’s highly intelligent, she’s confident and stylish," he told the publication. "She’s somebody that we really want to be in business with.”

It will feature a diverse cast of actors—including a few that you might recognize.

While the original film was largely white (there were no people of color in the main cast), the Hulu-produced Four Weddings and a Funeral reboot boasts a number of actors hailing from different parts of the world. The lead characters, Maya and Kash, are a couple of color; Maya is a Black American woman with gorgeous natural hair working in politics, and Kash is a British-Pakistani investment banker with a stiff upper lip. The internet's sweetheart Nathalie Emmanuel (Missandei from Game of Thrones) will play Maya, and Nikesh Patel will be making his American debut as the other half of the lovestruck duo.

Other familiar faces in the reboot include Rebecca Rittenhouse (The Mindy Project), Brandon Mychal Smith (Sonny With a Chance and Get On Up!), and even the silver fox and zaddy of rom-coms himself, Mr. Dermot Mulroney (My Best Friend's Wedding, The Wedding Date). Andie MacDowell is rumored to also be making an appearance in the show, but the word is still out on whether she'll be reprising her role as Carrie. Maybe her cameo will involve giving our star-crossed lovers some good advice—who knows? What we do know for sure is that Hugh Grant won't be popping 'round to say hello. Sorry, y'all.

The casting for the Four Weddings and a Funeral is in stark contrast to that of the 1994 film, and it's a purposeful power move. “Let’s be honest, Four Weddings is one of the whitest movies ever,” Emmanuel expressed frankly in a conversation with Entertainment Weekly. “There weren’t many of us that you saw onscreen in movies of that era.” And she makes a really good point; only a few of the most mainstream films of the 90s featured people of color, and that number was even lower within the rom-com genre. Four Weddings and a Funeral wants to remedy that.

There will still be four weddings and a funeral.

The cast of the remake may be look very different from the original, but many elements of the film's storyline will still be present in the series, specifically the titular four weddings and a funeral that bring that main characters together. Four Weddings and a Funeral also takes place, for the majority of the show, in London; after a college study-abroad trip to the United Kingdom brings them together, Maya and her group of friends plant roots in the city and make their lives there.

Richard Curtis, the writing genius behind the 1994 movie, signed on to serve as an executive producer to help Kaling maintain some of the film's structural integrity, but this show promises to be something different from anything we've ever seen before. "At first I thought, ‘Why would I ever do it?’ I was thinking about it and I thought, well, you know, if I was going to do this, because I love the world, I love the world of the movie that makes you fall in love with London, it’s about friendship. That part of the movie I really did love," the Late Night actress told Deadline. "I thought if I can do this in a way where I wouldn’t have a lot of comparisons to the original source material, which is perfect, and if I did it in a way through the lens of Mindy Kaling, I would think that would be an interesting project."

We actually cannot wait to binge-watch this. Bring on the feels!

Four Weddings and a Funeral will be available for streaming on Hulu on July 31.

Ruby Rose Is the New Face of Urban Decay
This content is created and maintained by a third party, and imported onto this page to help users provide their email addresses. You may be able to find more information about this and similar content at piano.io
Advertisement - Continue Reading Below
More From Culture
Dyland Arnold Is a Breakout Star in 'You' Season 3
'Virgin River' Season 4: Everything We Know
Advertisement - Continue Reading Below
Madi Prewett Shares Her Favorite Self-Care Books
'Only Murders' Is Getting a Season 2
Every 'Squid Game' Hint You Missed Along the Way
Meet the Cast of Netflix's 'Squid Game'
Listen to the Best New Love Songs of 2021 (So Far)
Shalita Grant Is Hilarious in 'You'
'Squid Game' Season 2: Everything We Know
Breaking Down the 'You' Season 3 Finale