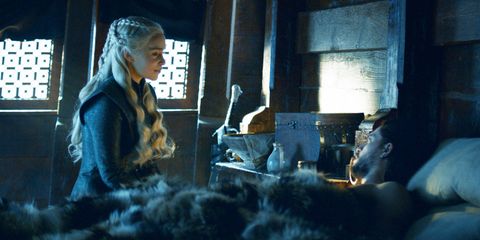 This post contains spoilers for the Game of Thrones episode "Beyond the Wall." Please don't read any further if you haven't seen the episode. Be strong, like Ser Jorah Mormont or The Hound.

A hop and a skip after Daenerys called Jon Snow too "little" to be a potential suitor, she held his hand, participated in some intense staring, and gave way to the birth of a new union (and romance) on Sunday's Game of Thrones. The episode also included several references to succession, children, and what the future of Westeros could look like post #Jaenerys (or #Jany, or whatever ship name your heart desires right now).

In a wine-filled meeting with Dany by the fire at Dragonstone, Tyrion asks what her grand plan is after she defeats Cersei and takes the Iron Throne. "How do we make sure your vision endures? After you break the wheel, how do we make sure it stays broken?" He acknowledges Dany's state of (in)fertility and suggests thinking outside the box. "You say you can't have children, but there are other ways to choose a successor. The Night's Watch has one method. The Ironborn, for all their many flaws, have another," he says, referring to the more straightforward approach of voting for the best leader, regardless of blood relations. In classic Dany fashion, she's not into the topic at all and suggests talking about only "after I wear the crown." Message received.

Related Story
Does the \'GoT\' Finale Trailer Confirm a Theory?

But before the episode wraps, Dany, having seen Jon's battle wounds (which included the remnants of the blade that sliced into his heart), brings up the topic of succession on her own and tells Jon that her dragons (R.I.P. Viserion) are "the only children I'll ever have." It's imperative Jon understands this before proceeding with whatever future they plan to have together. It's a heartbreaking subject for Dany, who in the books delivers a stillborn and is cursed/told by the witch Mirri Maz Duur that she cannot bear any children and that Khal Drogo will never recover from his coma. When Dany asks if Drogo will ever be fully restored, the witch says, "When the sun rises in the west and sets in the east. When the seas go dry and mountains blow in the wind like leaves. When your womb quickens again, and you bear a living child. Then he will return, and not before." Interestingly enough, the show's version of this scene left out the words "when your womb quickens again."

With a season finale on the cusp and just one more season to go in the entire series, it's anyone's guess how GoT will address this part of the curse. For Dany, not being able to bear children other than her beloved dragons is the only truth she's known ever since her encounter with Mirri Maz Duur. And depending on how you look at it, Jon's decision to bend the knee and recognize Dany as his queen could greatly impact their roles in the Great War and Dany's belief about her infertility. Is he here to reverse Dany's curse? Hard to say. And does the fact that he was resurrected by the Lord of Light undo any potential dangers of being in a relationship with someone he's definitely, maybe related to? How much time do you have?

One thing is for sure: Ser Jorah Mormont wholeheartedly believes Jon Snow will father children one day. On the same episode, Jorah briefly brings up Jon, kids, and the future while playing a little game of Pass the Longclaw as their group ventures beyond the wall in search for the Army of the Dead. When he insists that Jon keep the sword, he re-gifts Longclaw with these blessed words: "May it serve you well, and your children after you," which might as well have been written on a greeting card. Jon's immediate reaction here could relate to the terrifying thought of fathering children one day or the fact that it's just super cold and his Ikea-made coat is not sufficient. My money's a combination of both. Just look at him:

Yes, Jorah's re-gifting of Longclaw, plus those incredible words, could be read as him finally letting go of any hope he had for a future with Dany. Jorah, once again, has come up short in the romance department. (Jorah must have been cursed by a Lorathi wizard to forever watch his beloved Dany fall for one man after another.) But his professional mission remains stronger than ever. And if all goes well, Jorah, who has long been fighting the good fight on behalf of his queen, may one day fight alongside any heirs that come out of this union. Bittersweet picture, right? Someone send a raven to Cersei, though she probably suspects all of this already.

The season finale of Game of Thrones airs Sunday, August 27.