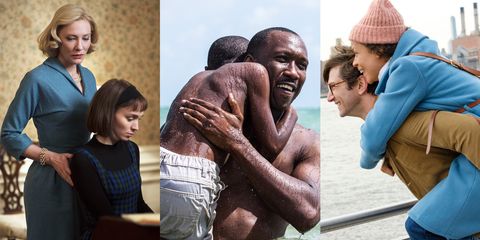 Courtesy of Shutterstock/ A24 /Netflix

We're coming up on the end of a very successful hot girl summer (word to Megan thee Stallion), and that means dropping a few of the potential dating prospects that you picked up in the summer months in order to focus on finding the one. We're officially entering the first stages of cuffing season, a time to get serious about your love life so you can be snowed in with someone when that blizzard hits. Ironically enough, cuffing season also happens to coincide with sad girl fall, the point of the year where everyone is listening to Lana Del Rey (and, if you really want to take it there, Take Care-era Drake) on repeat and taking as much vitamin D as humanly possible to avoid falling into the trappings of seasonal affective disorder.

If the thought of cuffing season and sad girl fall occurring at the same time is a nightmare for you, you're not alone. Fortunately, there's an efficient way to feel all the feels without actually having to put yourself out there in this cold, cold world: Watching sad, romantic movies on Netflix! The butterflies in your stomach from being around your crush, the nervous excitement around a first kiss, the stress of not knowing how to define your relationship, the heartbreak of losing your first love—you can now experience all of those same emotions, just from the safety of your couch!

So yes, this list is practically tailor-made for you, a person who enjoys crying in their free time. Ahead, 15 films that are now streaming on Netflix, perfect for placing you deeply and permanently in your feelings. Enjoy!

Hilary Swank stars in the seriously ugly cry-inducing film about a woman who finds herself widowed after her husband (Gerard Butler) dies from a brain tumor. While struggling to deal with the loss, Holly discovers that her late husband has left a very involved series of notes to help her come to terms with her new life, all of them ending with "P.S. I love you." If you're somehow able to watch this movie without pausing to weep at several different points...I really don't what to tell you. Honestly.

A boy raised in Miami tries to figure out his place in the world in the face of an abusive relationship with mother, bullying at school, and confusing romantic feelings for another boy in his class. From start to finish, Moonlight is beautifully scripted, shot, and executed, plus literally everyone in this movie acts like their life depended on it—hence the reason that it won three Oscars in 2016.

Joseph Gordon-Levitt and Seth Rogan star in this dramedy that is as funny as it is sad, as a journalist battles an aggressive cancer with only a 50 percent survival rate. All's well that ends well (and there's a little ~romance~ along the way), but that doesn't mean you won't shed a few tears here and there.

Okay, so this isn't technically a movie, but if you like smiling through your tears (or even just straight-up sobbing), Mr. Sunshine needs to be added to your list immediately. Starring prominent actors such as Lee Byung-hun, Kim Tae-ri, and Yoo Yeon-seok, the 24-episode Korean drama follows the journey of a Joseon expat who is forced to reconcile with his painful past when he returns home during the late 1870s as a captain of the U.S. Marine Corps. He falls in love with a young woman from a traditional family who represents everything he hates about Joseon, and together, they fight for the future of their homeland.

This whole relationship thing isn't easy—just ask Dean (Ryan Gosling) and Cindy (Michelle Williams), two young people from vastly different backgrounds who fall in love after a chance encounter at a nursing home. However, their picture perfect love story quickly becomes complicated when Cindy finds herself pregnant, the father of her child unknown. Things continue to spiral for the couple until finally, they realize that they just might not be a good fit anymore.

Soulmates Abbi and Sam have been together since they were kids, and they're planning a bright future together, starting with a visit to the doctor to see if a baby is in the cards for them. But it's not a baby that shows up in Abbi's ultrasound; it's actually stomach cancer, and it doesn't look like it's going anywhere anytime soon. Obsessed with setting her husband up with a proper life after she's gone, Abbi comes up with a plan to hook Sam up with someone new, but her fixation on the future threatens to destroy her present.

Thought Bollywood films were all music and dancing? Think again. The 2001 romantic drama Guzaarish is a devastating detour from the feel-good vibes and high energy that Bollywood movies are often known for, centering on the painful journey of a famous magician named Ethan Mascarenhas who finds himself bedridden after a sabotaged magic trick renders him quadriplegic. Against the wishes of his family, his fans, and his love interest/personal nurse Sofia, Ethan decides to file a court petition to legal undergo euthanasia.

Hrithrik Roshan and Aishwarya Rai reunited to play the leads in Guzaarish just two years after starring together in Jodhaa Akbar, but unlike the 2008 romantic epic, this film will leave you bawling in the fetal position.

Based on the memoir Travelling to Infinity: My Life with Stephen, The Theory of Everything depicts the extraordinary love between famed physicist Stephen Hawking and his wife Jane. Their meet-cute took place at a party at the University of Cambridge, where Stephen studied physics and Jane majored in literature. As the years passed, the pair grew closer and closer, the love between them beating the odds even as a neurological disease ravaged Stephen's body.

Reeling from the pain of his recent divorce, an anti-social writer named Theodore purchases an artificially intelligent virtual assistant who he calls Samantha. Theodore bonds with Samantha over time, their relationship developing into what he believes to be true love.

Her might not be "sad" in the same way as many of the other films on this list, but there's something about the idea of falling in love with a computer program instead of a real life human being that is terribly, terribly bleak. Maybe it's time to get back on Tinder—the dating pool can't be that bad...can it?

A seemingly mismatched man and woman nursing their respective traumas become a couple after a right swipe on a dating app leads to real love connection. But as the pair's relationship develop, secrets, infidelity, and a lack of boundaries underscore the idea that sometimes, love just isn't enough.

Please don't be deceived by the film's quirky, happy-go-lucky trailer—One Day is an emotional rollercoaster of a movie. Emma (starring Anne Hathaway with a questionable British accent) and Dexter (Jim Sturgess) are friends whose relationship spans the course of 20 years, seeing them through failed careers, divorces, and children. Without spoiling too much of the film, its last act will literally have you staring blankly into space for hours afterwards the closing credits.

One of most emotionally distressing films in Will Smith's extensive filmography (Pursuit of Happyness is up there, too), Seven Pounds is a story about a man who sets out to change the circumstances of seven different people by sacrificing his own life.

I'm not going to lie to you: Seven Pounds destroyed me to the point that I was only able to watch it once. I suspect that you might feel the same way after watching it.

Where did Jane Austen get the inspiration for literary masterpieces like Pride and Prejudice and Emma? From her own love life, of course! In Becoming Jane, we watch as the spunky writer develops feelings for diamond-in-the-rough Irish lawyer Thomas Langlois Lefroy. Based on Jane's real dating life, the film explains exactly why the writer was so interested in bringing characters from contrasting backgrounds together in love—it's because she lived through it herself. Damn.

In the early 1950s, a glamorous housewife (Cate Blanchett) crosses paths with an aspiring photographer (Rooney Mara), and an instant chemistry is sparked between them. However, amidst the regressive social landscape of the times, the lovers are forced to shield their relationship from the eyes of their family and friends.

If there's anything that Nicholas Sparks is really good at, it's making people fall in love. Making readers cry until they fall ill is a close second, and that talent is perfectly demonstrated in Nights in Rodanthe. Richard Gere and Diane Lane star in the 2008 romantic drama as an older couple who gets a second chance at love, but be careful not to get too invested in their love story...it is Nicholas Sparks we're talking about here.

Related Story
2019 Was the Year of the Documentary
Ineye Komonibo Ineye (in-NAY-yay) Komonibo is the editorial fellow at MarieClaire.com.
Advertisement - Continue Reading Below
More From Unmissable Movies
The Documentaries You Can't Afford to Miss in 2020
The 8 Best Rom-Coms of 2020
Advertisement - Continue Reading Below
HBO Is Making Iconic Shows & Movies Free to Watch
'Parasite' Is (Finally!) Coming to Hulu
The Best Teen Movies of 2020
Family Movies Both Grown-Ups and Kids Will Love
The Best Wedding Movies of All Time
19 Most Underrated Films of All Time
The 19 Best Murder Mystery Movies
Movies That Will Get You Through Your Breakup