Today's Top Stories
1
The Outnet Summer Sale Is the Best of the Season
2
100 Women on Why They’re Voting in November
3
Where Kamala Harris Stands on Gun Control
4
6 Easy Escapes From NYC
5
Yes, You Can Wear Glitter Nail Polish
Rick RowellGetty Images

Clare Crawley, poised to be the lead on The Bachelorette this season, arrived on our TV screens back in 2014 as a contestant on Juan Pablo Galavis' Bachelor season. At the time, and certainly in the years since, he's become notorious as the worst Bachelor of all time—and, frankly, how he treated Crawley is a huge part of that. Thankfully, their time together also led to one of the most epic beat-downs in Bachelor history, as Crawley took all that pent-up rage and really let him have it. Let's revisit that glorious moment, and everything that led up to it.

What happened to Clare on Juan Pablo's season?

Crawley was introduced to us all as the contestant who showed up with a fake baby bump. But she and Galavis had chemistry right off the bat, and even hooked up in the ocean in a very steamy moment. Then, Galavis had the absolute audacity to turn it around on her and shame her for what happened, saying that he didn't want his daughter to see what had happened between the two of them. (I know.) Which made Crawley cry and every Bachelor fan wonder aloud: Wait, but YOU chose to have sex on TV too, you asshole!

As for poor Crawley, that should have been a big red flag for what was about to come. The two also had a terrible, terrible final date: "So as the helicopter's landing, we have a rare moment together with no cameras, nobody there with us and Juan Pablo leaned over and whispered something to me," Clare later explained. "He chose to tell me something that no woman wants to hear. It was insulting, it was offensive and it just made me feel awful." Apparently, he told her he really didn't know her but added that he wanted to have sex with her when the show was all over. Yuck.

How did Galavis' season end?

After all that terrible drama, Crawley came in second, and Galavis was predictably a jerk about unceremoniously dumping her. And finally, finally, after a season of indignities, Crawley had the opportunity to lay into Galavis ("I would never want my children having a father like you"—ouch). I have watched this 20 times today and plan on doing it a lot more:

Of course, Galavis listened to absolutely none of it, but fans cheered, and it pretty much cemented Crawley as a fan favorite. She went on to two seasons of Bachelor in Paradise and one season of Bachelor Winter Games. Galavis went on to be a sports consultant, and married Osmariel Villalobos in 2017.

Related Stories
40 Facts You Didn’t Know About 'The Bachelor' 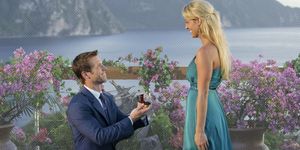